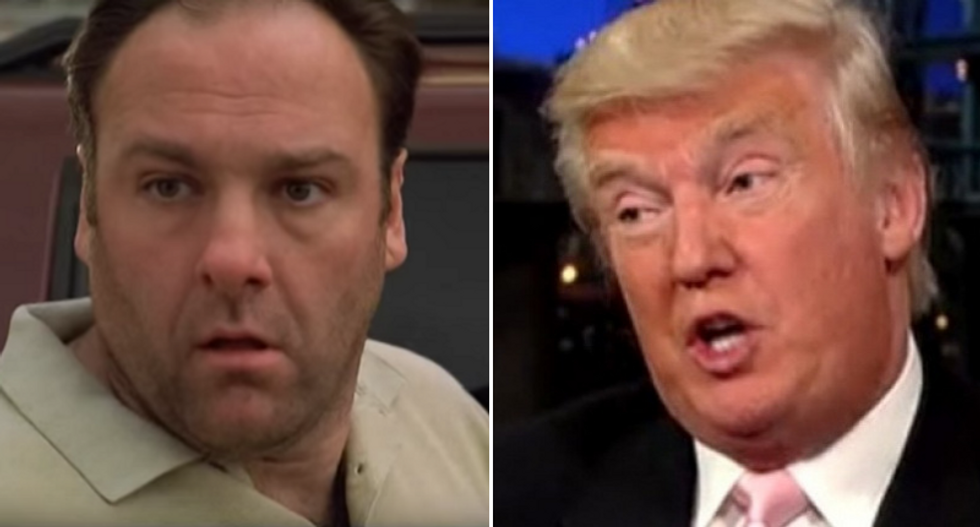 The author of a new book analyzing The Sopranos revealed that the show may have predicted Donald Trump's rise to the presidency.

Truthdig's Jacob Sugarman reported that the circumstances at the series much-hyped finale were oddly prescient.

In the final episode, patriarch Tony Soprano's son AJ announces that he's going to fight in Afghanistan with the Army in hopes of ultimately getting his trained as a helicopter pilot and then "afterwards go to work for Trump or somebody."

The war in Afghanistan is still on, the report noted, and "Donald Trump has improbably ascended to the White House, his family’s criminal undertakings offering their own source of fascination for the American public."

Matt Zoller, co-writer of a new book critically re-examining the seminal series titled "The Sopranos Sessions," told Truthdig that the show's core is more alive in America in 2019 than it was when the show debuted 20 years ago.

“I think the thematic heart of the show—corruption, consumption and waste—are subjects that are on people’s minds to a far greater degree now than they were in the late ’90s,” Zoller said. “And I hate to be so blunt, but we have a kind of gangster president.”

The book's co-writer told Sugarman that Trump would not even have been a Tony Soprano, but rather the type of guy the mafia patriarch would have killed.

"When I first heard Donald Trump announcing his presidency—the way he was talking and the way he was acting like a tough guy, implying that he could have people beaten up, or legally crushed, and making it clear that if you were loyal to him he loved you—he sounded like one of the two-bit gangsters Tony would end up killing before the end of the season, simply because he was too loud and too stupid to be allowed to live," Zoller said.

The writer noted that things have gotten increasingly worse for the United States since the era that the show debuted in came and went -- and that he's "stunned that we didn’t have somebody like Trump in charge of the country sooner."

"I look at that guy, and I feel like I’m seeing what we actually are and never wanted to admit," Zoller said. "And I think, as a country, we need to spend some quality time with [Soprano's psychiatrist] Dr. Melfi and take a good, hard look at ourselves."

Read the entire interview via Truthdig.