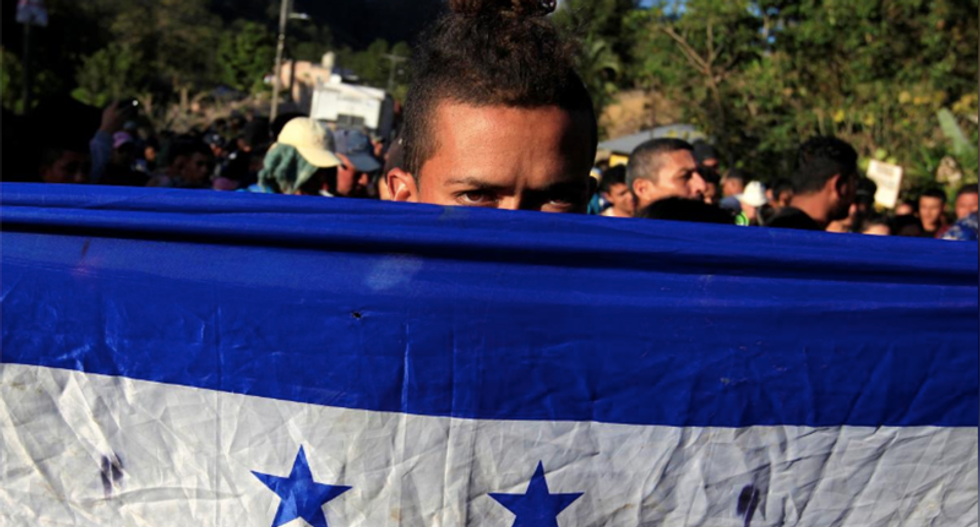 A Honduran, part of a new caravan of migrants traveling to the United States, looks from behind a Honduras flag as he waits to cross into Guatemala, at the Agua Caliente border checkpoint in the municipality of Ocotepeque, Honduras January 15, 2019. REUTERS/Jorge Cabrera

Several hundred Honduran migrants in a new U.S.-bound caravan crossed into Guatemala on Tuesday, as U.S. President Donald Trump seized on news of the advancing group to try to build support for a wall along his country’s border with Mexico.

An additional 350 Hondurans crossed into Guatemalan territory, but were being detained by migration officials checking their documents, according to pro-migrant activists traveling with them.

Some migrants ran toward the port of entry where they were met by a large group of Guatemalan police, and nearly 150 were turned away because they lacked proper documents, police said.

“Those who (lack documents) will be turned back,” said Alejandra Mena, a spokeswoman for Guatemala’s migration authority.

A second group of about 300 Honduran migrants walked along a highway and expected to reach the same border crossing on Tuesday night, activists said, while a smaller group of about 50 migrants had gathered in at a plaza in the capital of El Salvador with the intention of joining up with the caravan.

Earlier on Tuesday, Honduran Deputy Foreign Minister Nelly Jerez told reporters that the caravan at the Agua Caliente crossing numbered between 800 and 1,000 people.

Central American caravans heading toward the United States have inflamed the debate over U.S. immigration policy, with Trump drawing attention to the bedraggled migrants to try to win backing for his plan to build a wall on the U.S.-Mexico border.

“A big new Caravan is heading up to our Southern Border from Honduras,” Trump tweeted on Tuesday. “Only a Wall, or Steel Barrier, will keep our Country safe! Stop playing political games and end the Shutdown!”

Trump has described the migrants as an invading force and he sent troops to reinforce the border last year. On Monday, the Pentagon announced it would extend the deployment of about 2,350 troops to the U.S. border through to the end of September.

Television footage on Tuesday showed mainly younger migrants leaving the notoriously violent Honduran city of San Pedro Sula. Some flagged down rides, aiming to catch up with the caravan that left the same city on Monday.

“We’re asking them to let us cross on our way to Mexico,” said Honduran migrant Josue Hernandez ahead of the checkpoint guarded by Guatemalan police.

The group will likely face weeks of travel to get to the U.S. border, and many of those persuaded to join the caravan have been misinformed about the likelihood of being able to enter U.S. territory, said the head of Mexico’s migration authority.

“They are uninformed about what is happening,” Tonatiuh Guillen told broadcaster Radio Formula.

“In this context of vulnerability, there are opportunists and a great distortion of reality.”

U.S. Secretary of Homeland Security Kirstjen Nielsen said in a post on Twitter that her agency was closely monitoring the caravan.

“To be clear - participation in a caravan does not grant you a special status or provide you special treatment,” she said.

About 2,500 migrants from a previous wave of Central Americans who crossed Mexico have been camping in shelters in the Mexican border city of Tijuana.