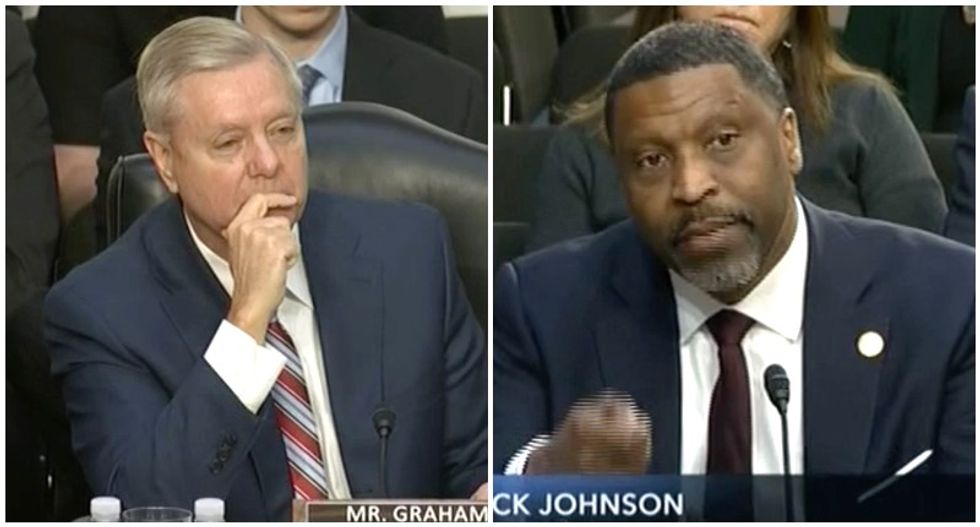 Sen. Lindsey Graham (R-SC) complained that conservatives consistently got poor grades on social justice issues -- and a pair of civil rights activists shut him down.

The South Carolina Republican grilled Derrick Johnson, the president and CEO of the NAACP, after he testified that William Barr's views on race and discrimination were "singularly disqualifying."

"How much is about this administration, versus Mr. Barr?" Graham asked.

Johnson explained that it was difficult to separate President Donald Trump from his nominees, and Graham launched into a lengthy complaint about the NAACP's scorecard for rating lawmakers.

"I disagree with your scorecard rating, that I'm not a racist and I certainly don't know how to close this gap -- I'd like to," said Graham, who pointed out that his NAACP score was the highest among Republicans on the Senate Judiciary Committee, at 22 percent.

Johnson explained the organization, which he pointed out was nonpartisan, rated lawmakers on their voting to promote the NAACP's agenda on racial justice, which is set by delegates from across the country.

"How many of them are Republicans?" Graham said.

Johnson said some of the group's national board members were Republicans, but he said the NAACP didn't track party affiliation of members.

"We don't make partisan decisions, we make policy decisions, and it's informed by members across the country," Johnson said. "Some are Democrats, some are libertarians, some are Republicans."

Graham still didn't understand why Republicans earned such low marks on racial justice, and he suggested the NAACP was wrong, not GOP lawmakers.

"Maybe the problem is on our side, I don't think so," Graham said. "I think the agenda that you're pursuing in the eyes of conservatives is not as good for the country as you think it is. It's got nothing to do about Republican and Democrat, it has to do with liberal and conservative."

"You got to ask yourself, why does every conservative on this committee -- the best I can do is to get 22?" he added.

Johnson suggested that Graham and other Republican lawmakers do some soul-searching.

"I think the members of the Republican Party should ask yourselves," he said, "are you willing to be expansive enough and inclusive for the rights of individuals -- despite their racial background, their interests are met, not based on conservative or liberal tendencies but based on those individuals' needs and interests."

Marc Morial, president of the National Urban League, offered to help Graham understand why he hadn't gotten a better score on racial justice, and the senator demanded to know one Republican the civil rights groups would support as attorney general.

"To expect Trump to win and everything Obama did to stay the same is unrealistic," Graham said. "Let's look at the qualifications because a Democrat will win one day, they will nominate somebody with the completely different policy view than I have. it will be a very simple decision -- if I can find a difference, I'll vote no."

"The question I'm trying to ask the country is, do you expect quality people to be chosen by the other side who have differences with you?" the senator added. "If the answer is yes, then Mr. Barr is as good as it will get."

Morial told Graham that many expected he would be Trump's nominee for attorney general, and he would have considered supporting him -- which seemed to flatter the GOP lawmaker.

"Well, I appreciate -- I'm not nearly as qualified as Mr. Barr," Graham said. "I don't think I could hold a candle to him, but the fact you said that, I appreciate that and let's see if we can find a way to get above 22 percent."