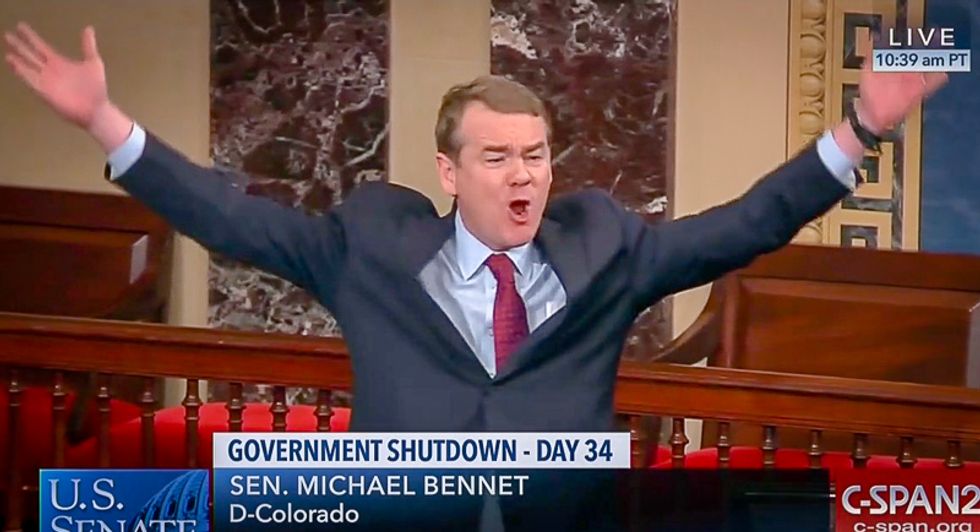 Sen. Michael Bennet (D-CO), a normally low-key member of Congress, on Thursday lashed out at fellow Sen. Ted Cruz (R-TX) for refusing to open the government while crying "crocodile tears" about first responders not getting paid.

During a debate over a bill that would pay members of the Coast Guard without reopening the government, Bennet rose to object to Cruz's grandstanding.

"I seldom rise on this floor to contradict somebody on the other side," Bennet explained. "I have worked very hard over the years to work in a bipartisan way with the presiding officer with my Republican colleagues, but these crocodile tears that the senator from Texas is crying for first responders are too hard for me to take."

The Colorado senator then recalled that Cruz had triggered a government shutdown over health care in 2013 while there was flooding in his state.

"It was under water. People were killed," Bennet reminded Cruz. "People's houses were destroyed. Their small businesses were ruined forever. And because of the senator from Texas, this government was shut down for politics. Then he surfed to a second-place finish in the Iowa caucuses."

Bennet said that Cruz was "no help" to the first responders who were not getting paid in Colorado due to the 2013 shutdown.

"This is a joke!" the Democrat exclaimed at one point.