Maddow: Putin has ‘blackmail in a bottle’ on Trump — and he ‘is doing tricks for Russia on command’ 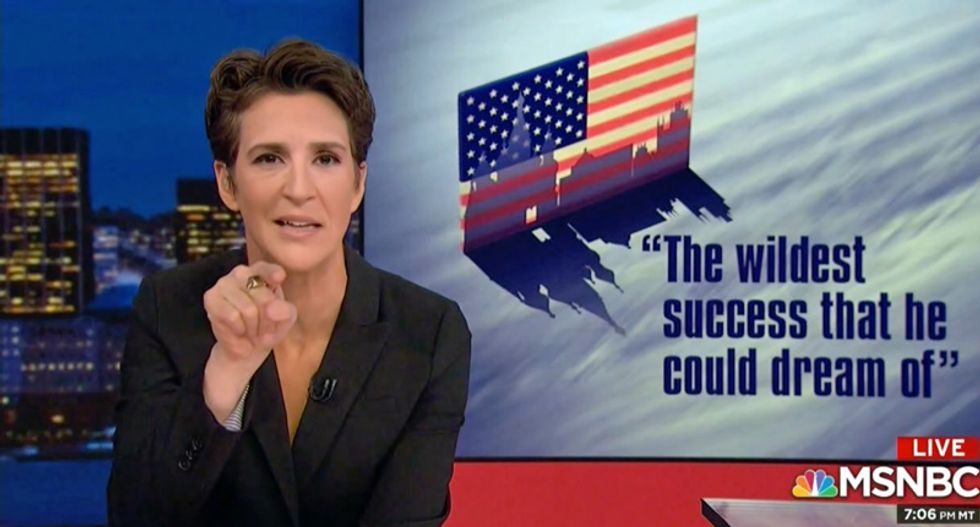 "Today was a stormy day in the news cycle, which is something we're getting used to in this political climate that surrounds this unsettling presidency," Maddow explained. "But today, today was not just like a normal stormy day in the news in the Trump era. Today was like a whole bunch of storms stacked up one after the other -- plus ten earthquakes."

"Today was just nuts. It started very late last night, actually, with the The New York Times reporting that President Trump repeatedly within the last year has told administration officials that he wants to destroy NATO, that he wants to pull the United States out of NATO," she reported.

Maddow drilled down on the timing of the story, which was sourced to administration officials. She said it appeared they were "trying to pull a fire alarm" by talking to The Times.

"It's one thing to be a senior official in the Trump administration and to be worried or upset but the prospect the president wants to give away the store, that he wants to dismember NATO and give Russia every item on the most fantastical international wish list -- even the ones that would previously have been dismissed as unthinkable in this country under any leadership," Maddow explained.

"And now we find out there's really no way to know if the president is making these decisions and taking these actions specifically because Russia's president has been telling him directly, face-to-face and person-to-person this is what he needs to do," she noted. "Because now we've learned that there is no record of the conversations between Trump and Putin because Trump ensured there are no records of those conversations."

Maddow then likened Trump to Putin's dog -- trained to obey his master's demands.

She said, "this same U.S. president that does tricks on command, keeps giving Russia even more leverage over him all the time," Maddow explained.

"Trump may have taken, you know, confiscated and destroyed his own American interpreter's notes, but there is no reason Putin did the same thing, right?" she explained. "I mean, he took notes, too."

"Russia now knows whatever happened in the meetings, Trump is desperate to keep it secret and they undoubtedly have a record of the truth of what happened in those meetings. That's like blackmail in a bottle," she said.

"Think about it, whatever happened between Trump and Putin in the meetings, Russia knows," Maddow noted. "Russia has a record of that and has that to wield against him if they need to give his leash another little tug."