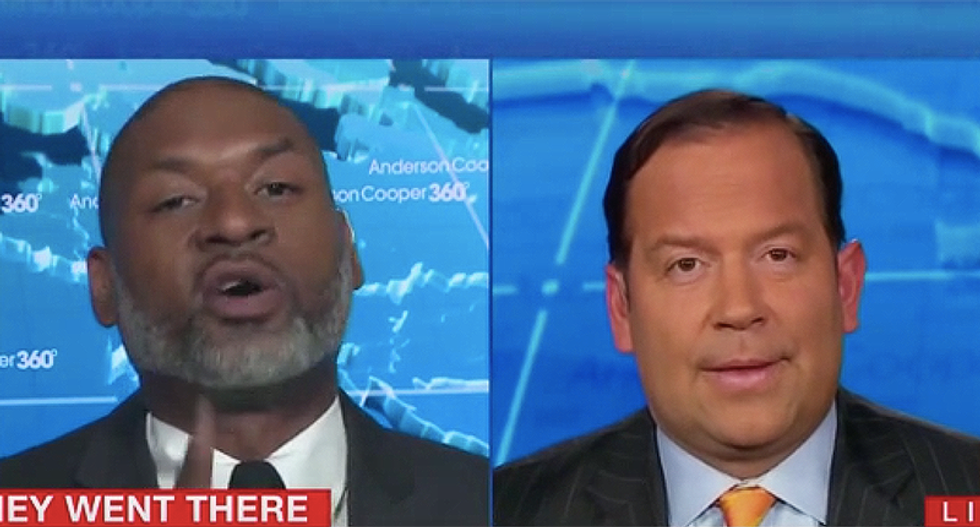 Cortes has become an expert at drawing rage from his debate opponents with personal attacks, but it was Blow that put Cortes in his place.

The conservative tried to claim the president has never said anything even remotely racist, which host Anderson Cooper corrected and cited the "good people on both sides" argument. Cortes tried to claim Trump was talking about the monument debate and the good people there. A transcript of the press conference shows something entirely different.

When Blow called Trump a racist, Cortes accused him of slander, which was when the argument erupted.

"Let me tell you this as well, first of all, never say on television that I tried to slander anybody. I'm telling the truth. And you're lying, as usual," Blow said.

"Calling [Trump] racist is a slander," Cortes said of the observation.

Cortes again tried to cut in but Blow shouted him down: "You will not interrupt me!"

Cortes got defensive, but Blow said that when one defends racists or pretends not to see racism that they become part of the problem.

"You're not blind, they play the clips in front of you like they play them in front of me," Blow continued. "You watch them on television. You come on and asked Anderson to enumerate the ways in which the president was racist, things he said were racist and pretend you didn't know them already, was already false. Was already false. You knew it was false. You want to put him back on his heels to take up the time to enumerate these things you already knew. You enumerated those things, you started to defend them as not being what everybody in America knows they are. That's fine, Steve. You can be a part of it. I'm not knocking you for supporting his racism."

Cortes tried to shoot back that Blow has no idea if he's "pretending" or not, but given that Cortes is a nightly commentator on CNN, a conservative radio host and is on the president's Hispanic council, he should probably be informed on these issues.

Watch Blow school Cortes in the video below: