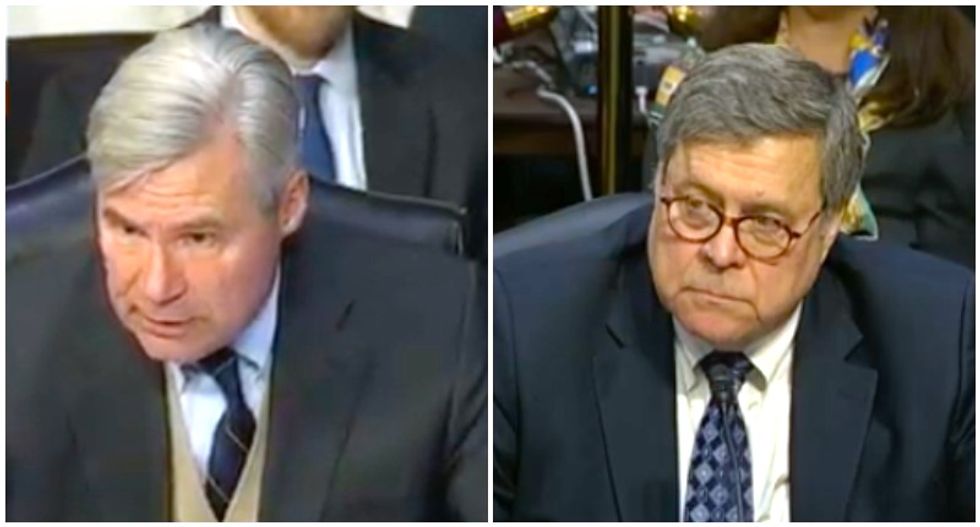 The acting attorney general received more than $1.2 million in salary from a conservative nonprofit that does not reveal its donors, and Whitehouse asked nominee William Barr whether he would investigate the payments.

"In my letter to you I expressed my concern that Mr. Whitaker was paid $1.2 million through what I consider to be a front group that has very little reality to it," Whitehouse said, "and that the funding that came to that front group to pay him, the million dollars came through another entity that is essentially an identity-laundering operation that has no independent business operation."

Whitehouse said the payment's mysterious origins made it impossible to comply with ethics regulations.

"The result of all of this is that somebody out there arranged to get over a million dollars to Mr. Whitaker," the senator said, "and we have no idea who that somebody is, and as I mentioned to you in our conversation, I don't see how we do a proper recusal and conflict analysis for somebody when the player who delivered the million dollars is still hidden behind the curtain. Is that something that you will help us fix?"

Barr said that he did not believe Whitaker had done anything wrong, and Whitehouse cautioned the nominee that there weren't enough facts in evidence to make that determination.

"You know, I think that that raises a very interesting point that I think I would like to review with the ethics people and experts in even (the Office of Government Ethics) to talk about that," Barr said, "because the more I thought about that, the more I thought that the trick is going to be deciding what kind of entities and how far back you go, because that can be said of a lot of different kinds of entities."

Whitehouse then suggested the Justice Department's money laundering investigators should examine the payments.

"If the department's money laundering folks looked at this operation," Whitehouse said, "they would see it as almost amateurish and simple and something quite easy to penetrate, and it would be quite easy simply to ask Mr. Whitaker what he knew, to ask whoever is still at (Foundation for Accountability and Civic Trust) what they knew, and to ask them to cough up the identity of the donor, and if they refuse to do that, nothing guarantees jobs at the highest level of government who is not willing to provide those disclosures."