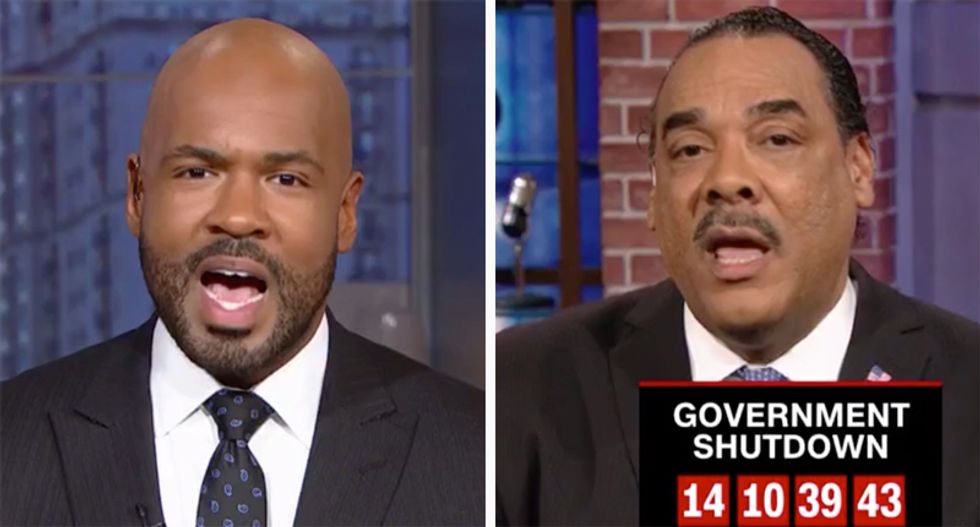 CNN anchor Victor Blackwell -- and even a guest -- had to shut down an advisor to Donald Trump's reelection campaign when he attempted to defend the president's shutdown of the federal government to build his wall.

Bruce LeVell is an advisory board member for the president's reelection effort and is executive director of the National Diversity Coalition for Trump.

"So far President Trump is insisting he is prepared for the government to be shut down for months -- years if necessary -- until he gets the money for the border wall, would even call a national emergency to resolve the issue," Blackwell noted.

Blackwell asked what authority Vice President Mike Pence had to negotiate after "the president chopped his legs out from under him twice." When LeVell did not answer his question, Blackwell had to ask again. Then reworded it to ask a third time.

LevVell still did not answer the question, but tried to distract by warning there could be another 9/11 terrorist attack.

"That's a straw man, nobody wants another 9/11, Bruce," Blackwell noted.

The host tried once again to ask the question about Pence's credibility to negotiate and instead moved on.

"Why hold the other departments hostage, when you can get them back to work, and if you have to fight over Homeland Security funding, so be it," Blackwell noted. "But why is the EPA shutdown?"

"At the end of the day, the president has to protect the borders by any means necessary, Victor," LeVell argued.

"I have to bring you back to the question," Blackwell said. "Why not get other departments open?"

Yet LeVell still had no answer.

"You're not answering the question," noted fellow guest A. Scott Bolden.

"What does shutting down EPA have to do with the wall or any of the other agencies?" Bolden continued. "He asked you for the argument, make the argument -- you're making political statements instead," Bolden added.

LeVell then complained that he didn't know who the host was.