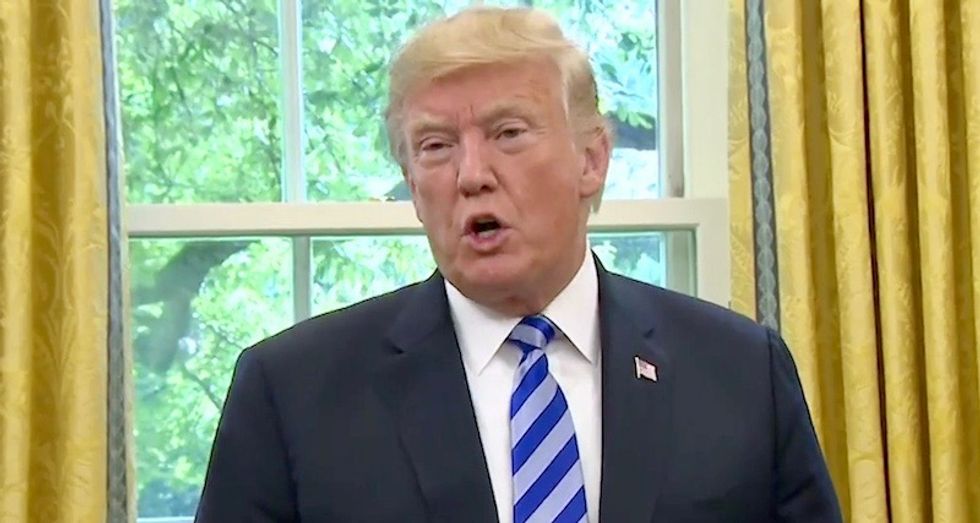 President Donald Trump has invited "hundreds, if not thousands" of guests to tour private areas of the White House, according to a new book, and frequently makes crass or demeaning comments about his predecessors.

The president often shows lawmakers, journalists and other guests where Bill Clinton and Monica Lewinsky reportedly began their sexual encounters, which Trump punctuates with facial expressions and crude jokes, reported the Washington Post.

The Post obtained an advance copy of former White House aide Cliff Sims' new book, Team of Vipers, which describes how Trump has guided hundreds of acquaintances and strangers through the White House, into the Oval Office and private residence.

“Most people want to keep parts of the White House private for their families and themselves,” said presidential historian Douglas Brinkley. “He’s very restless and doesn't like desk work. He'd rather roam around and B.S. with people than hunker down.”

Trump frequently tells guests that his private dining room was in "rough shape" when he arrived, and two White House officials and two other sources confirmed that he claims President Barack Obama spent much of his time there watching television.

“He just sat in here and watched basketball all day,” Trump told a recent group, and then bragged that he had gotten a much bigger TV than Obama had.

A former Obama White House official denied Trump's claims about a hole left in the wall, and said the former president rarely worked in the dining room and did not watch basketball there.

The former Obama aide also denied Trump's claim to tour groups that "no one had ever seen the Oval Office" during his predecessor's time in the White House, saying the former president often invited friends and staffers' family members to visit.

Aides say Trump is warm and gracious to his guests, and his mood generally seems lighter while giving tours than when he sits in White House meetings, but sometimes he interrupts his tours to comment on political matters or the special counsel probe.

“There was no collusion,” he recently told a group of lawmakers, according to one of the guests. “It’s completely insane!”