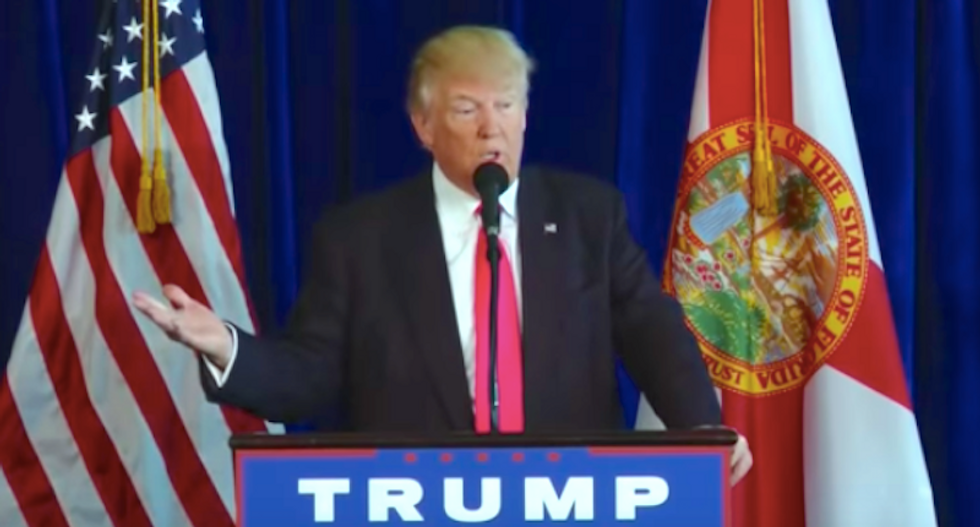 President Donald Trump committed a campaign violation and attempted Russia collusion in plan sight, according to a pair of legal experts.

The president's longtime attorney, Michael Cohen, implicated Trump in a conspiracy when he pleaded guilty violate campaign finance law, but ethics watchdogs Fred Wertheimer and Norm Eisen published an op-ed in USA Today pointing to an even more obvious crime.

"Federal campaign finance law prohibits any person from soliciting campaign contributions, defined as anything of value to be given to influence an election, from a foreign national, including a foreign government," they wrote.

Wertheimer, founder and president of Democracy 21, and Eisen, chairman of Citizens for Responsibility and Ethics, said the law prohibits solicitation and does not matter whether anything is actually delivered in return.

"But in this case, on or around the same day that Trump solicited help from Russia, Russia made its first attempt to break into servers that Hillary Clinton’s personal office used," they wrote. "That event is laid out in detail in an indictment of Russian hackers obtained by special counsel Robert Mueller."

The pair also said Trump -- who has given sworn affidavits claiming deep understanding of campaign finance law -- had been warned shortly before that infamous "Russia, if you're listening" speech that seeking support from foreign interests was illegal.

They know because one of them warned him.

"On June 29 and July 22, 2016, watchdog groups (including one led by one of the authors) filed complaints with the Federal Election Commission and the Justice Department, respectively, against Trump’s presidential campaign committee for illegally soliciting financial support from parliamentarians in countries around the world, including Iceland, Scotland, Australia and Great Britain," they wrote.

"Multiple news organizations had reported that Trump’s campaign was violating the ban on foreign solicitations by emailing fundraising solicitations to foreign nationals," Wertheimer and Eisen added.

The Trump campaign never responded to media requests for comment on that FEC complaint, but Wertheimer and Eisen said that political organization should be held accountable -- along with the president.

"Even though Justice is unlikely to change its mind on charging Trump, next best options are available," they wrote. "The Trump campaign is legally responsible under principles of vicarious liability for the statements of its head, and so could be indicted. The Russia solicitation could be included in an indictment featuring other counts, such as charging the campaign and the Trump Organization for the separate alleged hush money violations described by Cohen."

They said the president and his associates remained in legal jeopardy, despite his power and authority.

"No Justice Department policy prohibits prosecutors from naming the president as an unindicted co-conspirator in such an indictment," they wrote. "And with a five-year statute of limitations, he could still be prosecuted for these alleged knowing and willful 2016 offenses should he fail to seek or secure re-election in 2020."