The View co-hosts expose Howard Schultz as a sham: You can’t run the country like Starbucks! 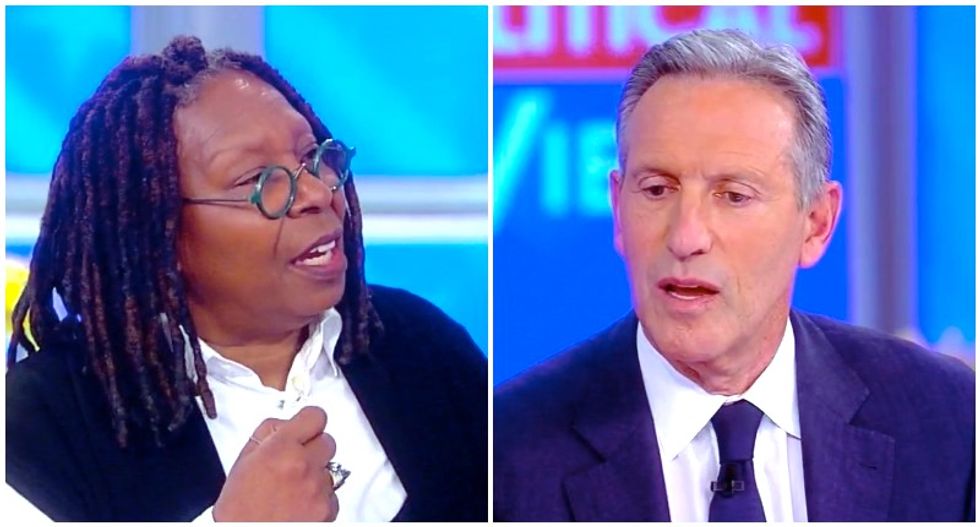 Former Starbucks CEO Howard Schultz appeared on "The View" -- and co-hosts Whoopi Goldberg and Joy Behar gave him an earful.

Behar started off by telling an anecdote from her days at CNN, when she ran into Schultz and jokingly asked for a latté, which he surprised her with a short time later.

"The CEO of Starbucks delivers a latté to me, very nice, and I also like the fact that you gave insurance to your part-time employees, that was really sweet, that's above and beyond," Behar said.

Then she asked why he would consider entering the 2020 presidential race and risk handing a second term to President Donald Trump.

"The main thing that scares me is that your entry into the race will guarantee Trump another four years, and we cannot have that," Behar said. "You talk about the Democrats not wanting to negotiate, they cannot negotiate with a toddler. You give him the cookie one day, the next day he wants another cookie, so it's not equal on both sides. They had to play tough, the Democrats, with him otherwise he will run amok. Now your entry into the race pretty much guarantees a Republican is going to win."

Schultz disagreed, and he insisted a "far-left" Democrat would also lose to Trump.

"If he runs against a far-left progressive person, who is suggesting 60 percent, 70 percent tax increases on the rich and a health care system we can't pay for, President Trump is going to get re-elected," Schultz said. "All I'm saying is, let me go out to the country and let the people hear my story. I grew up in the projects of Brooklyn, I gave my company comprehensive health insurance, equity in the form of stock options and free college tuition for every employee."

"You can't do that with the country," she said, and Schultz insisted he could.

"This is the same problem you-know-who has," Goldberg said. "When you own your company, you can make these changes as you want them to be. When you have to report to the Senate and the Congress and all the 50 million people that come in the middle, that's a little bit different."

"My big problem is," Goldberg continued, "I want people to stand up for what they believe in, and I think you're saying to people, 'I don't think you'll hear me unless I speak to you as an independent.' I think if you believe in what you believe in, then stand up for that as a Democrat and then change the party if you feel like that as opposed to going elsewhere."

In the next segment, Schultz denied that he was hoping Trump would win, but Behar called him out.

"No one wants to see him fired more than me," Schultz said.

"No one wants to see you run more than him," Behar said.