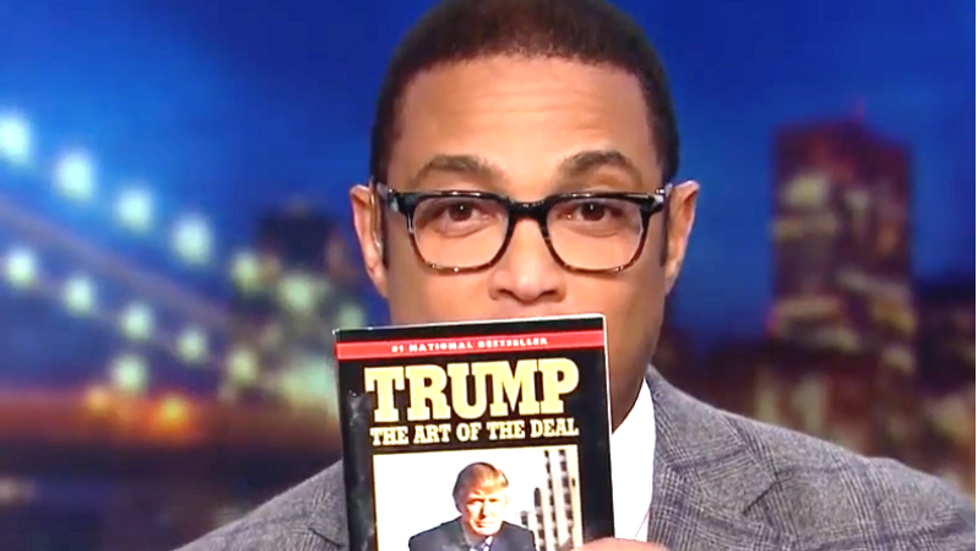 On Wednesday, CNN's Don Lemon mocked President Donald Trump's negotiating tactics by reading right out of his book The Art of the Deal.

Trump stormed out of a negotiating meeting with House Speaker Nancy Pelosi and Senate Minority Leader Chuck Schumer over the border wall and called it a "waste of time."

The government shutdown is going into its third week, and Trump's deal-making skills have proven to be inept.

"We all know Donald Trump didn't actually write this book, but maybe he needs to go back and read it for some tips on how to get out of this mess of his own making," Lemon said holding up The Art of the Deal.

"So as a public service, let me just read a few excerpts for you, okay?" he said.

Page 46: "I like thinking big. I always have. To me, it's very simple. If you're going to be thinking anyway, you might as well think big."

"Now, that one he seems to be following right there, okay? But this next one, okay, not so much. This is on page 48," Lemon said.

Page 48: "I always go into a deal anticipating the worst. If you plan for the worst, if you can live with the worst, the good will always take care of itself."

Lemon added, "This administration didn't plan. The president reportedly didn't know what a shutdown would do, like taking away food stamps from millions of Americans."

"You could read along with me from the text," Lemon joked.

Page 50: "I never get too attached to one deal or one approach. I keep a lot of balls in the air because most deals fall out no matter how promising they seem at first."

Page 53: "The worst thing you can possibly do in a deal is seem desperate to make it. That makes the other guy smell blood, and then you're dead."

"That is for sure," Lemon said.