WATCH: GOP congressman bellyflops in failed attempt to lie about not getting paid during shutdown 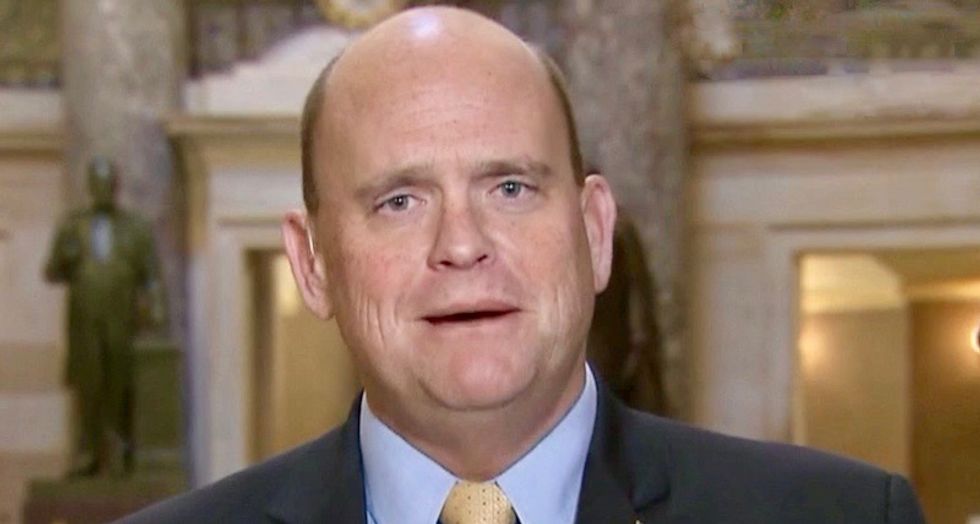 Rep. Tom Reed (R-NY) explains why he will keep his paycheck as the federal government remains shut down on CNN/Screenshot

A pro-shutdown Republican congressman bellyflopped badly in an attempt to dodge a CNN host's questions about why he was continuing to take a paycheck during the government shutdown.

"What do you say to the 15,000 federal workers across western New York, including in your district, that are not getting a paycheck this week?" asked Keilar.

"We're doing what we can," said Reed.

Keilar then asked Reed whether he was giving up his paycheck during the shutdown.

"Are you, as some members—dozens of members—giving up your paycheck during the shutdown?" she asked.

Reed either misheard or pretended to mishear the question.

"You know, we have taken care of that historically on the shutdown," he said. "We are going to continue to take care of that and make sure that we stand in solidarity with those federal employees that are adversely impacted."

"Wait, I don't understand. You said 'We'll take care of that.' By that, I think you're talking about back pay. Are you getting paid?" asked Keilar.

"Yeah, we will continue to obviously get paid," said Reed. "That's the process here in the House."

"But some members are forgoing their paychecks. Why wouldn't you do that?" she asked.

"Yeah, my understanding of that what happens is the check actually goes to members, given this form of shutdown situation, and you take care of that money by giving it to charity or back to the U.S. treasury," he said. "And historically we've taken care of that. And I just don't feel it's appropriate for me to use a PR stunt, or something along those lines on that front."

"First off, you make a lot more money than a lot of these federal workers," Keilar said. "How is it a PR stunt to, in solidarity, say 'I'm going to understand what it's like to not get a paycheck.'"

"What does that mean?" interrupted Keilar.

"Well, like, we've given to charity when we have shutdown situations, and we're going to continue to do that going forward, but, you know, to worry about members pay and things like that—I think we're also losing sight of what really is going on here," he said.

Reed then told Keilar that he opposed re-opening the government as Congress debated the wall because "we have to take care of this all at one time."