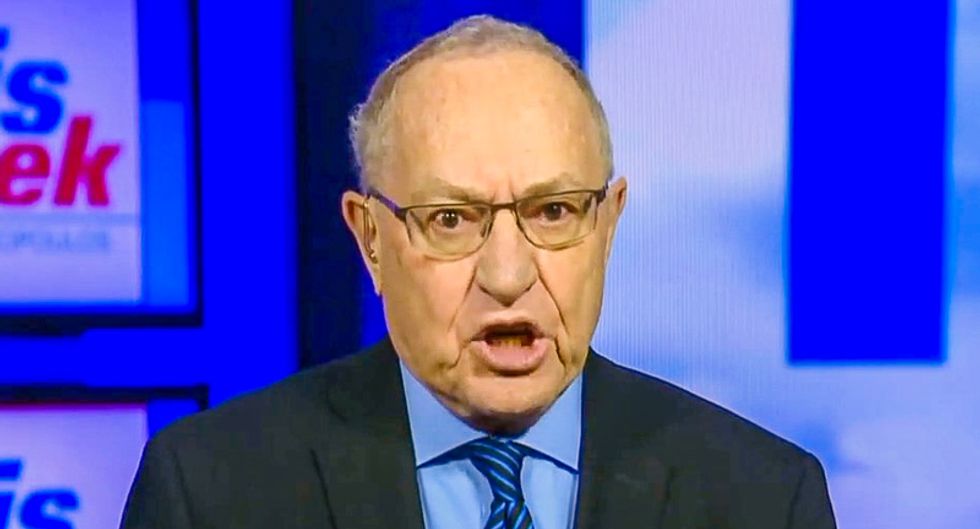 In an interview on ABC's This Week, Dershowitz claimed that AMI had a First Amendment right to threaten to publish nude photographs of Bezos if he did not drop an investigation into their "catch and kill" business practices.

"The First Amendment needs breathing room," Dershowitz argued. "This is a fight between two media moguls. There was a negotiation. It was a tough negotiation. I'm certainly not here to defend the journalistic ethics of The National Enquirer, but the First Amendment doesn't distinguish between The Washington Post, ABC News and The National Enquirer.

"There are crimes based on words and that's what extortion is," he explained.

"That's not what I'm talking about," Dershowitz shot back. "I'm talking about the fact that we're dealing with media here, and remember too that the alleged extortion occurred in a letter from a lawyer."

"I have been practicing law for over 50 years and I have never seen an extortion come in the form of a lawyer," the law professor added. "You don't get extortion by mail."

"Yeah, but the fact that American Media is a media entity does not immunize them from the types of crimes we're talking about here," Abrams pointed out.

House and Senate Republicans are mostly quiet about President Joe Biden having killed top al-Qaeda leader Ayman al-Zawahiri, a terrorist who was Osama bin-Laden's second in command. Few gave him credit for taking out the terrorist, despite lauding Donald Trump when he took out Abu Bakr al-Baghdadi and Qasem Soleimani.

Ayman al-Zawahiri was "a mastermind of the Sept. 11, 2001 attacks" who was "one of the most sought-after people by the U.S. for over two decades," NBC News reports. Some Republicans offered praise to the men and women in the armed forces, some to the CIA, the agency Biden used to carry out the assassination. And some used the killing of the top al-Qaeda terrorist as an opportunity to attack the President.

WASHINGTON, D.C. — Former "Daily Show" host Jon Stewart is back on Capitol Hill Tuesday to press the Senate to support the legislation to provide healthcare to veterans exposed to toxic burn pits.

"This country hangs by a thread, and that thread is the hundreds of legislative aides that work in these buildings that work really hard and they keep this thing going," Stewart told Raw Story on Tuesday. "The senators themselves, a lot of them, don't really know what's in this stuff. And there are egos, like — I've never seen egos like this and I'm in show business. And I've never seen corruption like this and I'm from New Jersey. So, you can imagine how f*cked this place is."

NEW YORK — A worker at a Brooklyn McDonald’s was shot in the face by a customer’s son during a wild spat over a food order, police said Tuesday. The 23-year-old employee was taking orders at the McDonald’s on Fulton St. near Throop Ave. in Bedford-Stuyvesant when a woman complained about her order about 7 p.m. Monday, cops said. An argument between the worker, the woman and her 20-year-old son quickly erupted and spilled outside and across the street, when the son suddenly pulled a gun and opened fire. The McDonald’s employee was shot in side of the neck just above the jawline, a police source...