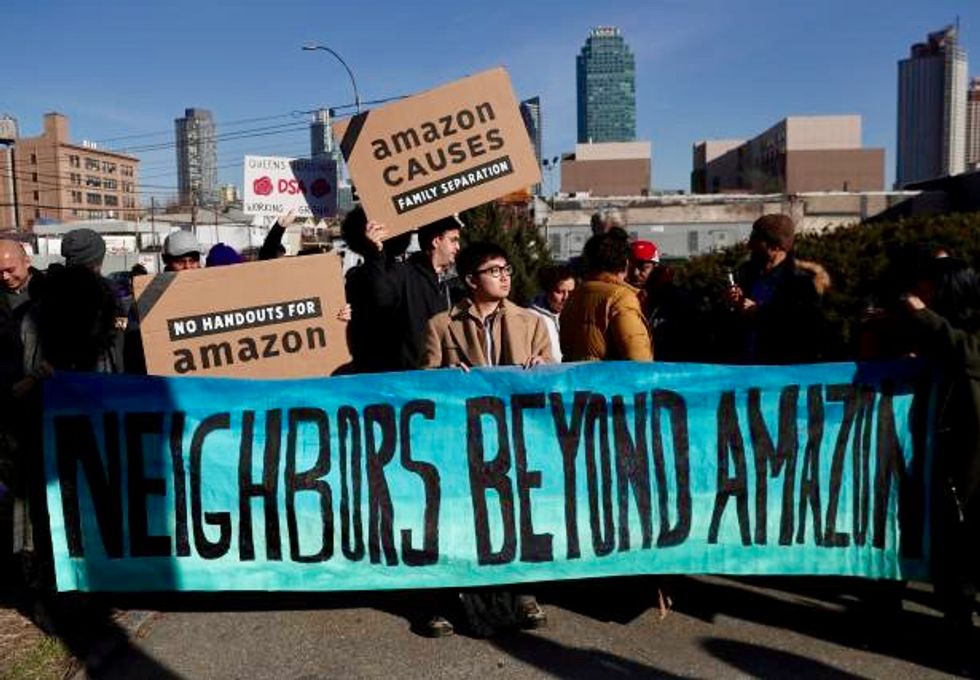 Demonstrators hold signs during a protest against Amazon in the Long Island City section of the Queens borough of New York, U.S., February 14, 2019. REUTERS/Shannon Stapleton

The democratic socialist congresswoman has become the face of the Democratic Party’s ascendant left wing, thanks in part to her upset victory last year in a district near the proposed Amazon.com Inc development.

“Anything is possible: today was the day a group of dedicated, everyday New Yorkers & their neighbors defeated Amazon’s corporate greed, its worker exploitation, and the power of the richest man in the world,” Ocasio-Cortez wrote on Twitter.

Amazon blamed local opposition for its abrupt reversal, which some saw as the latest evidence of the progressive movement’s surging influence ahead of the battle for the Democratic presidential nomination next year.

“They have shown sufficient power to back off the largest corporation in the world,” Douglas Muzzio, a professor at Baruch College in New York and an expert on city politics and public opinion. “They killed Amazon, the biggest beast around.”

Democratic U.S. Senator Elizabeth Warren, who has made anti-corporate criticism a key tenet of her 2020 presidential campaign, called the subsidies “billions in taxpayer bribes” and asked on Twitter, “How long will we allow giant corporations to hold our democracy hostage?”

Amazon had already been a favored target for some left-wing politicians due to its dominance of online shopping and reputation for imposing difficult work conditions on warehouse workers. The company has defended its practices and last year raised its minimum wage to $15 an hour, more than twice the federally mandated level.

But since Amazon announced plans for its so-called HQ2 in 2017 and began soliciting bids from hundreds of U.S. cities, the political environment in both New York and the country has shifted significantly.

Last fall, Democrats swept to victory in the U.S. House of Representatives, buoyed by left-wing energy and animus toward Republican U.S. President Donald Trump. In New York, Democrats took control of the state Senate from Republicans for the first time in a decade.

Democratic leaders in the state Senate then nominated Michael Gianaris, whose district includes the proposed Long Island City Amazon site, to a little-known state board that could have vetoed the project.

Gianaris, a Democrat, was a vocal critic of the billions in subsidies offered to Amazon despite initially calling on the company to consider New York.

“This was a shakedown, pure and simple,” Gianaris told reporters on Thursday.

Critics of the deal questioned why the third-most valuable company in the United States – with a chief executive, Jeff Bezos, who ranks as the world’s wealthiest man – required that level of public funding, including tax breaks and grant money.

Amazon also faced anti-gentrification sentiment in a city where income inequality and a lack of affordable housing have become major concerns. Some labor leaders opposed the deal unless Amazon agreed not to oppose unionization efforts, a position that the company representatives rejected.

Democratic Mayor Bill de Blasio, an enthusiastic backer of the project, faced outrage from left-wing activists who questioned how he could defend the subsidies while staying true to his liberal principles.

But he and Governor Andrew Cuomo, a fellow Democrat who spent the last year burnishing his own progressive bona fides while running for another term, had argued that the deal’s job creation benefits far outweighed any cost.

In a statement, Cuomo cast blame on a “small group of politicians” he accused of putting political interests ahead of their constituents’ needs.

De Blasio, by contrast, put the blame on Amazon for refusing to address local concerns.

“We gave Amazon the opportunity to be a good neighbor and do business in the greatest city in the world,” he said in a statement. “Instead of working with the community, Amazon threw away that opportunity.”