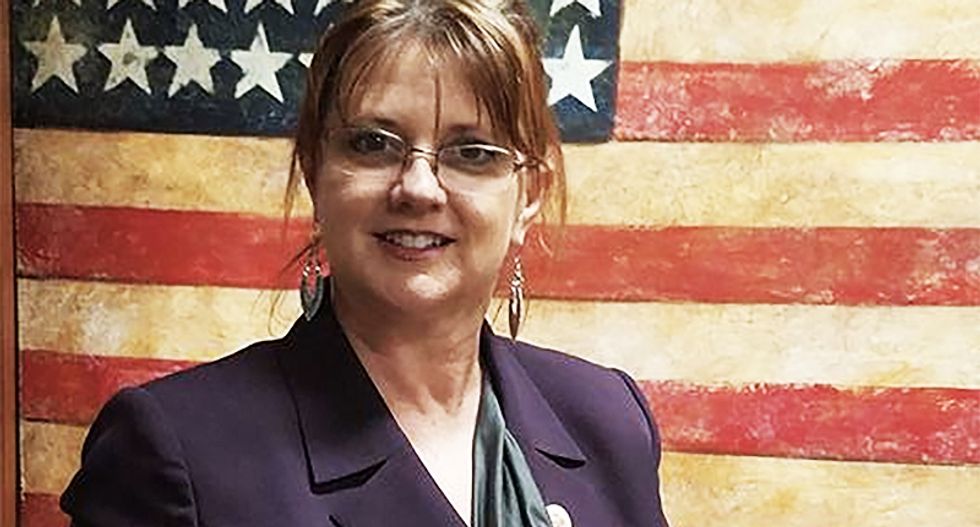 In a Facebook post, Arizona State Representative Kelly Townsend made the case that vaccines are somehow part of a Communist plot.

"The most holy and sacred last frontier of sovereignty is our own body," the Republican wrote. "Dearest friends and people of Arizona, it seems we are prepared to give up our liberty, the very sovereignty of our body, because of measles."

According to the Phoenix New Times, Gov. Doug Ducey (R-AZ) announced Wednesday that he was "pro-vaccination and anti-measles." The disease was once eradicated, but an uptick in anti-vaccine parents have caused outbreaks in several states. Ducey has promised, "not to sign any legislation that would reduce the number of children being vaccinated."

Similar to measles, there were 29 cases of polio reported in 2018. According to the World Health Organization, when any child is diagnosed with polio, all children run the risk of contracting it. Children that are too young to be vaccinated now run a higher risk of contracting such diseases by children whose parents refused to vaccinate them. Those infants often do not yet have a strong enough immune system to help fight the viruses.

The Times also noted that Townsend has a history of making inaccurate statements on her social media accounts. In past posts, Townsend has posted that women who do not dress in a moral way don't have a defense if they are raped.

"I read yesterday that the idea is being floated that if not enough people get vaccinated, then we are going to force them to," she also wrote. "The idea that we force someone to give up their liberty for the sake of the collective is not based on American values but rather, Communist."

She then followed by saying that she had a child who was injured by a vaccine but didn't explain the details.

The Republican Communist scare dates back to Sen. Joseph McCarthy who used the fears around the USSR in the 1950s to justify going after liberals he disagreed with. They often conflate the government practice of Communism with Communist countries who have restrictive laws. They similarly associate Socialism and Socialist Democrats with Communist, three different ideologies.

Townsend's argument is that forcing vaccines tramples American liberty and is an overreach by the government. Since vaccines impact other people outside of the unvaccinated child, it is seen as a public health concern.

The Republican signed off with a quote from Benjamin Franklin, who was pro-vaccine, The Times claimed.

"Those who would give up essential Liberty, to purchase a little temporary Safety, deserve neither Liberty nor Safety," she quoted.

Oddly enough, Towsend called vaccines a breach of liberty, but she believes the government should control women's bodies and be able to breach liberty to make decisions about pregnancies.