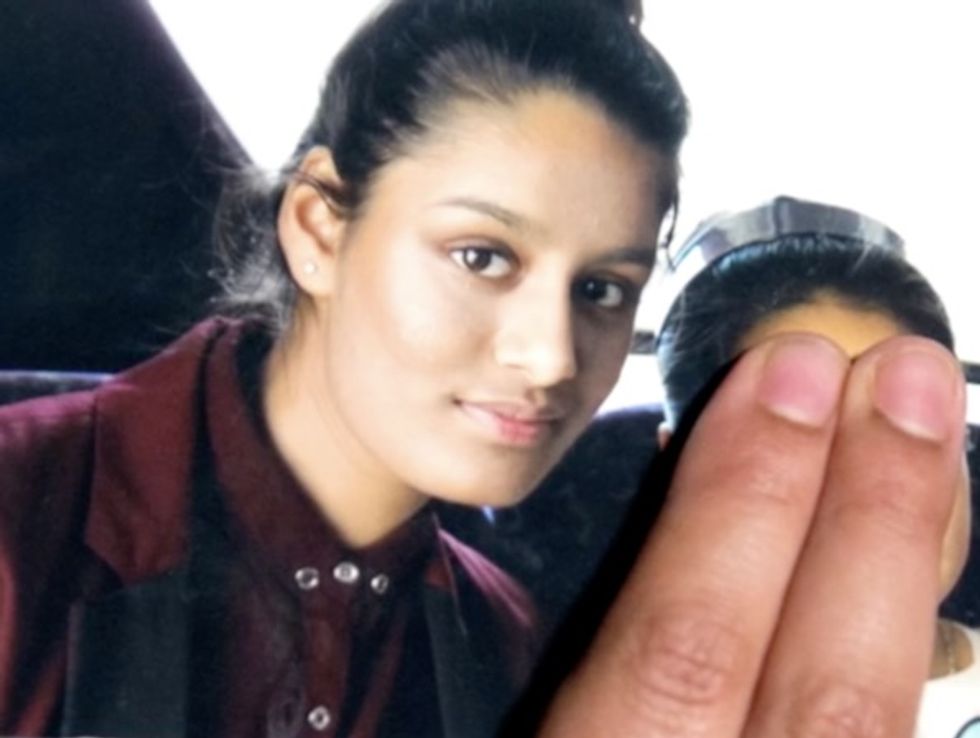 FILE PHOTO: Renu Begum, sister of teenage British girl Shamima Begum, holds a photo of her sister as she makes an appeal for her to return home at Scotland Yard, in London, Britain February 22, 2015. REUTERS/Laura Lean/Pool/File Photo

Britain stripped a teenager who traveled to join Islamic State of her citizenship on security grounds, triggering a row over the ramifications of leaving a 19-year-old mother with a jihadist fighter’s child to fend for herself in a war zone.

The fate of Shamima Begum, who was found in a detention camp in Syria last week, has illustrated the ethical, legal and security conundrum that governments face when dealing with the families of militants who swore to destroy the West.

With Islamic State depleted and Kurdish-led militia poised to seize the group’s last holdout in eastern Syria, Western capitals are trying to work out what to do with battle-hardened foreign jihadist fighters, and their wives and children.

Begum, who gave birth to a son at the weekend, prompted a public backlash in Britain by appearing unrepentant about seeing severed heads and even claiming the 2017 Manchester suicide attack - that killed 22 people - was justified.

She had pleaded to be repatriated back to her family in London and said that she was not a threat.

But ITV News published a Feb. 19 letter from the interior ministry to her mother that said Home Secretary Sajid Javid had taken the decision to deprive Begum of her British citizenship.

“In light of the circumstances of your daughter, the notice of the Home Secretary’s decision has been served of file today, and the order removing her British citizenship has subsequently been made,” the letter said.

The letter asked Begum’s mother to inform her daughter of the decision and set out the appeal process.

When asked about the decision, a spokesman said Javid’s priority was “the safety and security of Britain and the people who live here”.

Begum was one of three outwardly studious schoolgirls who slipped away from their lives in London’s Bethnal Green area in February 2015 to fly to Turkey and then over the border into the cauldron of the Syrian civil war.

Islamic State propaganda videos enticed her to swap London for Raqqa, a step she still says she does not regret. She fled the self-styled caliphate because she wanted to give birth away from the fighting.

“When I saw my first severed head in a bin it didn’t faze me at all. It was from a captured fighter seized on the battlefield, an enemy of Islam,” she told The Times which first discovered her in the camp in Syria.

She was equally harsh when describing the videos she had seen of the beheaded Western hostages, The Times said.

Begum has named her newborn, Jerah, in accordance with the wishes of her jihadist husband, Yago Riedijk, a Dutch convert from Arnhem. He was tortured on suspicion of spying by Islamic State but later released.

Her family’s lawyer said he could seek to challenge the British government’s decision to deprive her of citizenship.

“We are considering all legal avenues to challenge this decision,” said lawyer, Tasnime Akunjee.

British law does allow the interior minister to deprive a person of British citizenship when conducive to the public good, though such decisions should not render the person stateless if they were born as British citizens.

Police in Bangladesh said they were checking whether Begum was a Bangladeshi citizen, and Britain’s opposition Labour Party said the government’s decision was wrong.

“If the government is proposing to make Shamima Begum stateless it is not just a breach of international human rights law but is a failure to meet our security obligations to the international community,” Diane Abbott, Labour spokeswoman on home issues.

Ken Clarke, a former Conservative minister, said he was surprised that Javid’s lawyers had given him such advice.

“What you can’t do is leave them in a camp in Syria being even more radicalised... until they disperse themselves through the world and make their way back here,” he said.

“I think the Germans, the French and ourselves have got to work out how to deal with this difficult and, I accept, dangerous problem,” he said.