'This is bullsh*t': Ex-Republican Howard Schultz consultant storms off after he's asked about his candidate 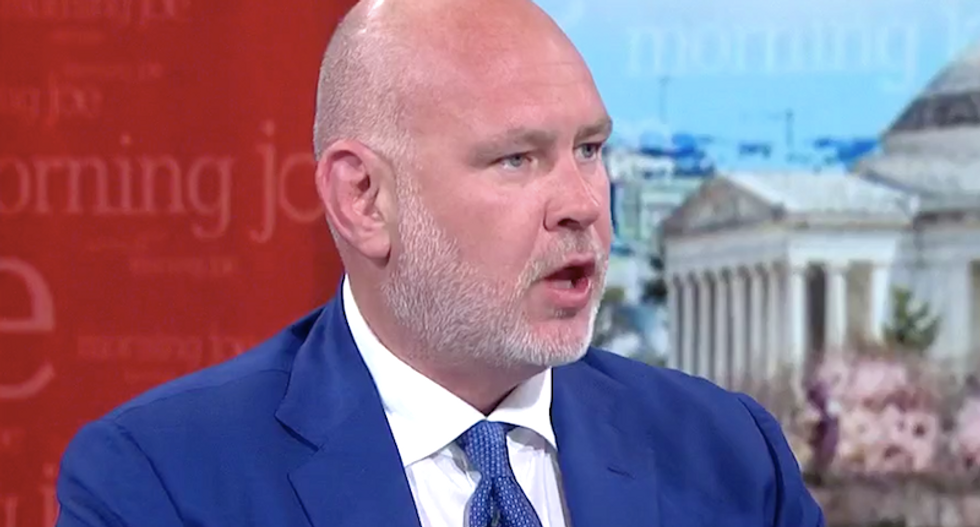 Republican strategist Steve Schmidt hasn't had much support for his decision to take on Starbucks CEO Howard Schultz as a client. Now he's getting a little peeved at those still asking him questions.

Schultz's rollout has been a contentious one with right-wing Republicans laughing and celebrating his candidacy and Democrats railing against it. It's believed that the corporate centrist could be another spoiler candidate who could help re-elect Donald Trump.

Schmidt had a civil but fraught panel discussion with MSNBC's Nicolle Wallace for taking on Schultz as a client.

A Daily Beast article reported Schmidt stormed out of his own podcast when someone asked about Schultz. The site described Schultz as someone who "operates on a pretty short fuse."

"Just how short, his two longtime friends and podcast partners, Adam Levine and Elise Jordan, found out when they sat down last Tuesday to interview him on their show Words Matter about Schultz’ just announced potential presidential bid and Schmidt’s role as the chief adviser to the Starbucks founder in it," the Beast explained.

Schmidt started the "Words Matter," but Jordan explained that he wouldn't be treated as any other candidate. While Jordan worked for George W. Bush, she's hardly an establishment Republican, having also worked for Rand Paul's presidential campaign.

Schmidt said he shouldn't have to justify himself on his own show.

“This is not Trumpistan,” Schmidt said, noting every person has the right to run for president and this isn’t even a campaign, but so far a “speculative effort.”

Levine wanted to know the pathway to victory for Schultz, who is running as an independent. Some states have hoops and requirements for an independent candidate to get on the ballot. Schmidt dismissed the question, saying there are "multiple pathways." He cited recent polls showing Schultz pulls Democratic votes away from Sens. Bernie Sanders, Elizabeth Warren and Kamala Harris.

Levin then asked about the 70 percent marginal tax rate for the uber-rich, which would return the tax rate. Schmidt dismissed it. Levin attempted to make a little joke about it before asking for specifics about the policy plan.

“Will Derek Jeter or another athlete not hit another home run because they’re going to get taxed at 70? What’s the economic behavior that he thinks is anti-growth, other than his own pocket?” he asked.

“This is bullsh*t,” Schmidt exclaimed. “I’m not doing this.”

“Steve, you’ve got to answer the questions,” Levine told him.

“I’m not,” Schmidt replied, slammings down his headset and stopped the interview. He then threatened the studio if it appeared on the site, The Beast said. The studio ignored him and will post it on iTunes Monday.

“My objection is not on a tough question. It’s the surreality of having a podcast hijacked from me. Until this recording, I had always thought this was Elise’s and my podcast," Schmidt told The Beast in an interview.

Liten to it below: