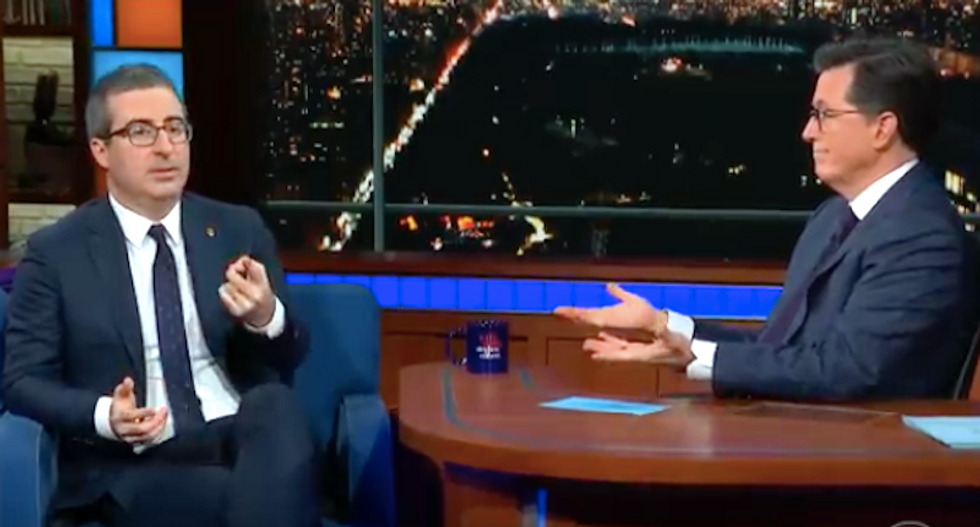 John Oliver appeared on "The Late Show" with Stephen Colbert, just days before his own show returns from hiatus.

"The end is in sight," Colbert said, noting that Trump's first term was halfway over, and suggesting his presidency would end in two years.

“I definitely don't have that kind of optimism," Oliver said. "To say we're halfway through his presidency, I think, is to ignore the concept of second term possibility. We are two to six years away from the end his presidency.”

Audience members began to boo, and Oliver joked: “Oh, wow -- are there some big Trump 2024 fans in here?”

But, he said, Trump's presidency would eventually come to an end -- either in two years, or six years.

“We all have something to aim at,” Oliver said. “We all have a finish line like in a marathon that we can all try to stumble over, be covered in a silver cape and have someone say, you really shouldn’t have done that.”

“I think that’s what we all have to do, all of us, especially Ruth Bader Ginsburg,” Oliver said, as the audience cheered. “I mean, listen, if she can function Tinkerbell-style, that we can just keep her alive by clapping our hands, then at that point Pelosi needs to go full alligator clap. Just believe, children, believe!”