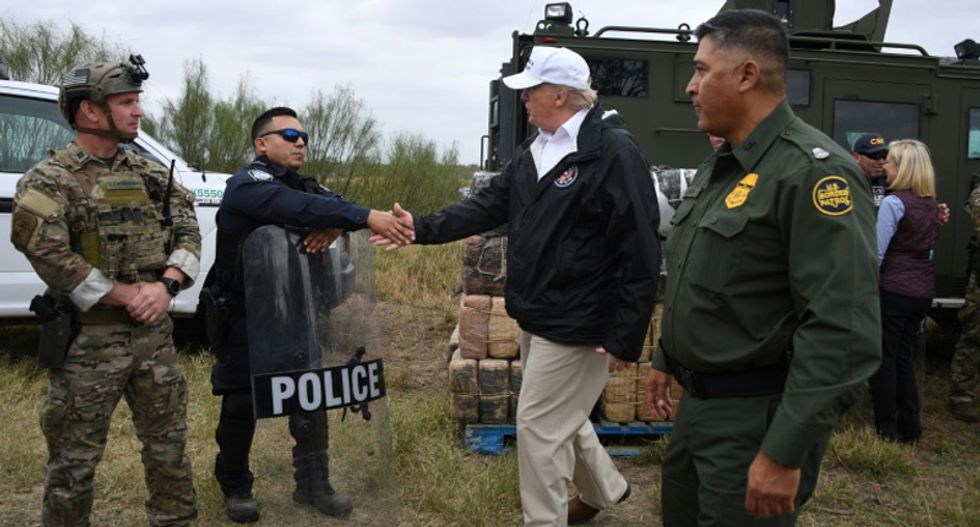 On Wednesday, Trump spokeswoman Kellyanne Conway chided Republicans for failing to secure funding for a border wall when they held both Houses of Congress.

Conway claimed that the GOP's failure to build a wall while they were in a majority justified President Donald Trump's emergency declaration.

“There’s no question the Republican House failed, and they failed us in securing the border, but they also failed to make good on the promise to him that we would get that money for the wall,” Conway said on Fox and Friends. “They completely lied about that.”

When President Trump, who is currently conducting talks in Hanoi, Vietnam, with North Korean dictator Kim Jong Un, makes his pitch for a wall, he cites the dangers that a wall would keep out of America.

That includes deadly drugs, criminals, and terrorists. He also claims that border agents largely support the idea of a wall.

But that's hardly true across the board.

Raw Story spoke with Sgt. Terry Blevins, who worked as a detective in Arizona. He's a former Terrorism Liaison Officer and security advisor with the US Department of Defense and State Department.

Blevins explained why in all of his years battling crime and working to prevent terrorism, the idea of a wall—much less that illegal immigration constitutes a national emergency–rarely occurred to him.

Tana Ganeva: You've worked border security and anti-terrorism in Arizona. What do you think of the President's border wall?

Terry Blevins: Well, I just don't believe that it's going to stop the flow of drugs. We know that the drugs that come across the areas of the border where there is no wall is a small percentage of the overall ingress of drugs.

Most come through border check points and the cartels have all kinds of ingenious ways they smuggle drugs, like ultra light planes to fly over and drop, or by airports or by ships. There are SO many other ways ... I feel like the money would be better spent in other areas than putting up a border wall.

To make the argument that a wall is going to stop the flow of drugs into the US betrays an ignorance of the actual numbers.

Tana Ganeva: What do you think of the President declaring a national emergency over immigration?

Terry Blevins: You know, I don't believe that it's gotten to the level of being a national emergency. I don't know the politics behind that particular part of it. But I just don't see the danger that is created by the lack of a border wall that would elevate it to that level. It doesn't make sense to me.

Tana Ganeva: The President's main pitch regarding the wall is that it's needed to keep Americans safe from criminals. Do you have any thoughts on that?

Terry Blevins: I worked in counter terrorism before and we really have not had significant ingress of people suspected or accused of terrorism crossing the border in the areas where there is no wall. Most of the people who have been suspected of terrorism came in by plane, or boat or legal entry check points.

In a way it's kind of surprising. But for whatever reason, the numbers just aren't there to support the idea that we would be slowing down any kind of terrorist activity.

As far as crime goes ... undocumented immigrants don't commit crimes at any higher rates than the average US citizen or legal immigrants. I don't think investing all that money on the wall is going to have a significant impact on crime. We should be focusing on spending that money elsewhere.

My instincts, back when I was working it...I might have felt different. But, when one looked at the numbers ... and also just seeing what was happening. I was never involved in any kind of situation at the Arizona counter terrorism information center, where I worked with immigration and border control and county agencies that patrol the border ... we never had any situation where we had suspected terrorists crossing the border through those areas. It just didn't happen.

We used to get bulletins constantly. One of the main purposes ... So this was a fusion center. After 9/11 there was a big push to have local and federal agencies communicate better.

One of the first in the nation was the Arizona counter terrorism information center. We created these fusion centers to share intelligence. They'd share it with member agencies. It was really cool for getting intelligence.

Every day we got bulletins ... it even got tiresome! And we just never had a situation where there were crimes, where putting up border walls would solve them.

Like, "Ohhhh we need a wall!" never occurred to me. We always needed more intelligence gathering, science, technology. But just building a wall ... I just never felt like "We should have a wall there!" That was never really a conversation among law enforcement that I spoke to. Even the border patrol agents.

I guess someone might say a wall could solve border problems. But that's by no means a unanimous feeling or push at the federal or local law enforcement level to get a wall built on the border.

U.S. Sen. Jon Tester of Montana is one of at least two Democrats who are expected to join every Senate Republican in a vote Wednesday night opposing President Joe Biden’s vaccine mandate on private employers.

In a written statement late Tuesday, Tester said that he’s heard from concerned constituents in his state about that pending requirement — which would direct employers with at least 100 employees to either ensure their workers are vaccinated against COVID-19 or that they undergo weekly testing.

Malik Mutaliyev walks by an abandoned amusement park in wintry Baikonur, a secretive town in Kazakhstan's inhospitable steppe that appeared alongside the eponymous Baikonur Cosmodrome where the Soviet Union's space program rose to glory.

"Our town has lived through a lot: Perestroika, the fall of the Soviet Union, electricity shortages. We've been through it all," says the 67-year-old former chief architect of Baikonur.

The US Supreme Court on Wednesday took up a case that asks whether schools that make the bible an essential teaching tool and reject gay and transgender students can receive government funding.

The nine-judge court featuring six conservatives were considering a school aid program in the northeast state of Maine and will render a decision in the spring of next year.