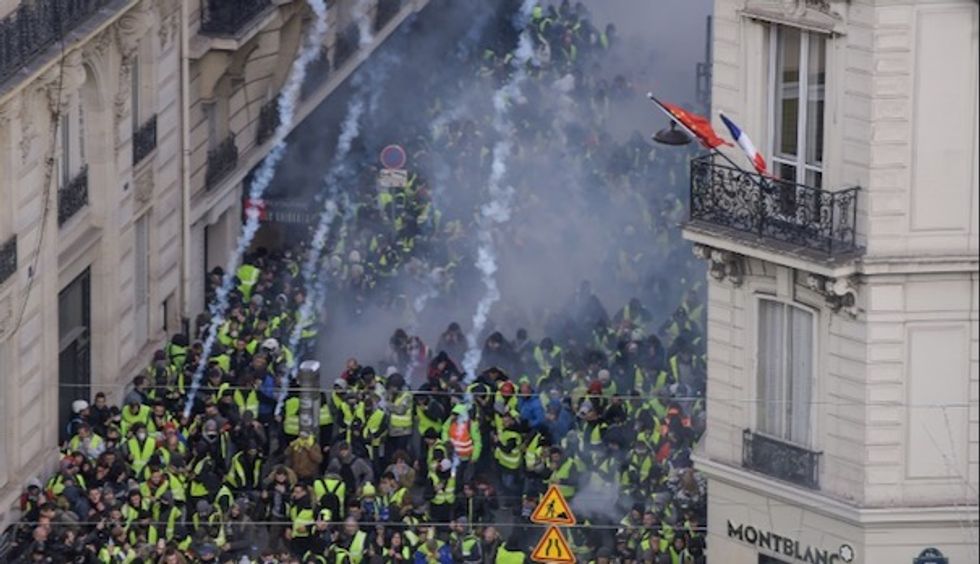 Shouts of "Macron, resign" mingled with the tear gas near the Champs-Elysees avenue AFP / Lucas BARIOULET

French police fired tear gas to disperse protesters who threw projectiles and set bins on fire in Paris, Lyon and Bordeaux on Saturday, as the 14th straight weekend of “yellow vest” protests took a violent turn in the afternoon.

In Rouen in the north, four people were injured after a driver tried to force his way through a crowd of protesters, authorities said.

Demonstrators gathered peacefully earlier in the day at the Arc de Triomphe in Paris, a flashpoint of clashes with the police in the early days of the protests, before marching toward the Eiffel Tower.

Later in the afternoon, police and hooded protesters clashed at the Esplanade des Invalides in central Paris where the march was expected to end, forcing some into adjoining streets where some skirmishes were reported.

In Bordeaux and Lyon, police also fired tear gas and charged, to disperse projectile-throwing demonstrators after bins were set on fire and properties destroyed.

Protesters tried to block a depot operated by online retail giant Amazon and some threw stones at police in Toulouse in the south, BFM Television reported.

A poll this week showed dwindling support for the “yellow vests” demonstrations, named for motorists’ high-visibility jackets, which began in November over fuel taxes and morphed into a more general revolt against politicians and a government they see as out of touch.

More than half of those surveyed said they wanted the occasionally violent protests to end.

But some at Saturday’s protests said they were part of a humanist movement aimed at improving the lives of everyone in the country.

“I can understand that some people have had enough, but we’re not doing this just for us,” said Madeleine, a 33-year old unemployed protester. “It’s a very humanist movement and we’re doing this for everyone. So if right now they’re fed up, then too bad for them.”

There has been infighting between leaders of the grassroots movement, although some have outlined plans to extend the weekly protests to Sunday.

The number of protesters have fallen from highs of over 300,000 nationwide in November to over 51,000 last week, according to government estimates.

French interior ministry said around 41,500 protesters took part in demonstrations across the country, compared with 51,400 including 4,000 in the capital, compared with 5,000 in Paris last week.