Here’s the one national — and international — emergency Trump got right 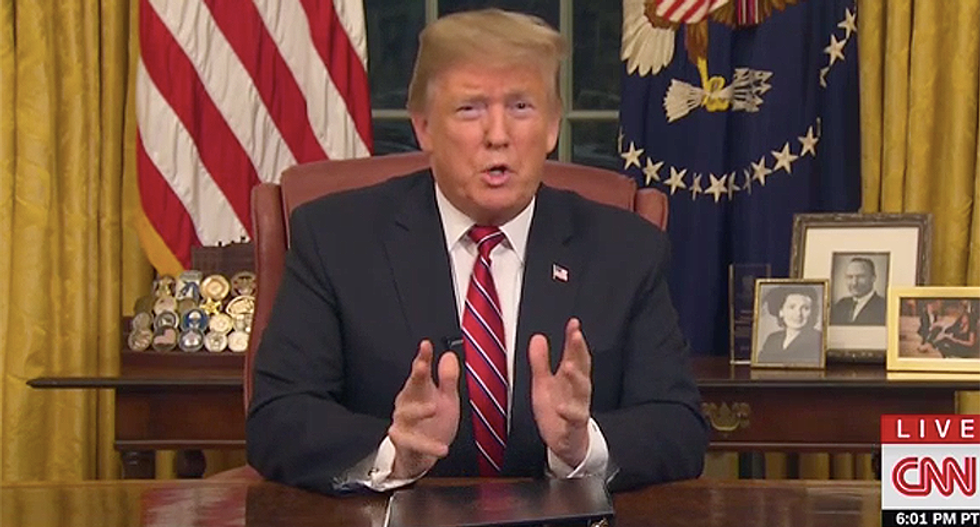 In case you have been living in a cloister under a media blackout — and if you have, I envy you — President Trump finally declared a “national emergency” last week, in a Rose Garden appearance that was baffling and incoherent even by his exalted standards. This is of course an attempt to circumvent the will of Congress and appropriate funds for his notional border wall, the one he variously claims is already being built (which it isn’t) and is urgently necessary to stem the cross-border tide of vicious criminals (which does not exist).

If Trump’s premise for his emergency is entirely imaginary, the declaration itself strikes me as one of the rare occasions when the president says something that is both true and profound. There is indeed an emergency; in fact, there are several overlapping and intersecting emergencies. They are national and hemispheric and global and planetary, and other adjectives besides.

We face a climate emergency that is now likely or certain to cause widespread devastation, including famine, disease, death and extinction. We face an economic and social emergency that is likely or certain to lead to tyranny and violent revolution. We face a political emergency that has already led to the implosion of the supposedly stable Western order of the past 60 or 70 years. (Which, spoiler alert, was not stable at all.) We could keep going, but the larger point is that all these emergencies are so profoundly interconnected as to be the same emergency. If Trump, in his wrong-headed, ass-backward fashion, compels us to face it at last — and face it together — then so much the better.

Understanding our emergency goes well beyond the idea recently expressed by historian Timothy Snyder to Salon’s Chauncey DeVega, that Trump himself is the national emergency, and beyond Ann Coulter’s elegant formulation that “the only national emergency is that our president is an idiot.” Both of those things are true, but neither is anywhere close to sufficient — and when it comes to Coulter, O people of the leftward spectrum, remember this piece of ancient wisdom: Don’t kiss the asp.

Nothing about the U.S.-Mexico border is an emergency, except perhaps for the Trump administration’s disastrous and inhumane policies and the outsized importance it possesses in the paranoid imagination of too many white Americans. I remember a Milton Bradley board game I loved as a child called Game of the States, which was meant to teach the state capitals and each state’s major products, and which depicted the continental U.S. in isolation, disconnected from any larger land mass. (Alaska and Hawaii, if memory serves, were off by themselves, floating in space.) Making America “great again,” to a large extent, means returning to that imaginary space in which our nation was sacrosanct, protected and cut off from the world.

Yes, that is an inherently racist and xenophobic fantasy, and flat-out stupid besides. But Trump’s loyalists are not the only people who want to go back to some prelapsarian state before everything started breaking bad. In fact, that’s a good way to summarize our current state of emergency, which unites us all, irrespective of race, religion, nationality or headgear status. It’s a constant, recurring theme in human society and culture, and a matter of special urgency at this moment: We want to go back to the past, but we can’t. We have to face the future, but we don’t know how.

Perhaps “Make America Great Again” doesn’t quite rank with the opening section of Proust’s “Swann’s Way,” about the tea-soaked madeleines and early bedtimes in childhood, or the final, lyrical “boats against the current” passage in “The Great Gatsby.” But they all address the same innate human yearning to recapture a past that can never be recaptured, and exists in the present only as fading and untrustworthy memories. Odysseus and Frodo Baggins make it home again, after all their adventures, but home is not the same and neither are they.

Are there lessons in those archetypal journeys that relate to our current state of political, social and planetary emergency? There always are. Most people reading this will agree that we can’t go “back” to some white nationalist Game of the States fantasy out of Donald Trump’s childhood imagination — largely because it was never real in the first place — and that it wouldn’t be a good thing if we could. But I recently had a friend, an accomplished writer and intellectual, tell me that it was urgently necessary to drive Trump from office, preferably through impeachment and prosecution, in order to restore the country to some semblance of normalcy.

I understand that impulse, of course. But I’m afraid that the implied premise — which is that before the 2016 election we had a stable and functioning democracy — is just as flawed and fanciful as the MAGA hat fantasy, if not as dangerous or destructive. Removing Trump from office (which is unlikely) or electing Joe Biden or Kamala Harris or [insert name here] in November of next year (which is a good deal more likely) will not turn back the clock or undo the history-shaping significance of the Trump presidency.

Even more to the point, those eventualities would do little or nothing to resolve the systemic crisis of democratic legitimacy that currently afflicts every major Western nation and a whole bunch of others too. Do I really need to run down the list that begins with the tragicomedy of Brexit, the implosion of Emmanuel Macron’s presidency and the rise of far-right or anti-immigrant “populist” parties in almost every nation of the European Union? It is more difficult to find a constitutional democracy that is not experiencing a major political implosion or reorientation than one that is. Canada, perhaps? Japan? I’m nearly out of ideas after that.

In that sense, it’s possible the Trump presidency has done us a favor, by making clear to anyone with their eyes open that we can’t go back to the supposedly stable world of NATO and the International Monetary Fund and free trade and fiscal austerity, where “democracy” and “capitalism” and “freedom” were seen as synonymous and interdependent and the financial sector was treated as a priestly caste with unique access to divine knowledge. (I wasn’t going to use the buzzword “neoliberalism,” but I just did.)

That regime bred disastrous inequality, conferring more and more power and wealth on the ruling elite while condemning everyone else to lives of nonstop work, debt slavery and consumer diversion. It sowed bitterness and nihilism by convincing most people around the world (not incorrectly) that the political and economic system was stacked against them and democracy was a sham constructed to protect the interests of the powerful. Broadly speaking, it dealt with the crises of Islamic fundamentalism and widespread migration in piecemeal and self-destructive fashion. It was paralyzed for decades before the worsening climate crisis, unable or unwilling to navigate between the urgent need to reshape the world economy and the sacredness of the profit motive, and so bringing us to the brink of catastrophe (if not over it).

So Donald Trump is right, for once: This is an emergency. He did not cause it and as his followers are slowly and painfully discovering, he alone cannot fix it. I suppose he is making it worse. Then again, President Hillary Clinton would not have made our emergency go away. Indeed, I’m inclined to think she would have permitted us to ignore it a bit longer, which might have been less painful but not necessarily better in the long haul.

We can’t fix our emergency by hauling Trump out of the White House in chains, or by electing Joe Biden or Bernie Sanders or Kirsten Gillibrand — or, what the hell, Pete Buttigieg, the gay, Rhodes-scholar, combat-veteran, 39-year-old mayor of South Bend, Indiana — to replace him. I’m not suggesting that those might not be desirable outcomes in themselves (to varying degrees!) or that the political battles involved are meaningless. Leaders and symbols and messages are important. But in an emergency, they are not enough.

In the same week my writer friend told me that impeachment is the solution, another friend — not to my knowledge a radical or a Marxist — told me that violent revolution and the overthrow of the dominant global order is the only way forward. For a rising generation of young progressives (symbolized by my congresswoman), the Green New Deal, a package of hard-headed, pragmatic reforms and far-fetched utopian dreams, offers a middle path of redemption in between “get rid of this one guy” and “smash the state.”

I don’t know. I think it’s genuinely liberating for Americans of my generation, who have veered and triangulated through the bewildering eras of Reagan and Clinton and George W. Bush and Obama, watching things get better and worse and stay the same, to admit that it hasn’t quite worked and we just don’t know. We have an emergency, as the president just told us. We can’t go back to the past, and if we are willing to look at that past honestly, we wouldn’t want to. So let’s make a future together.