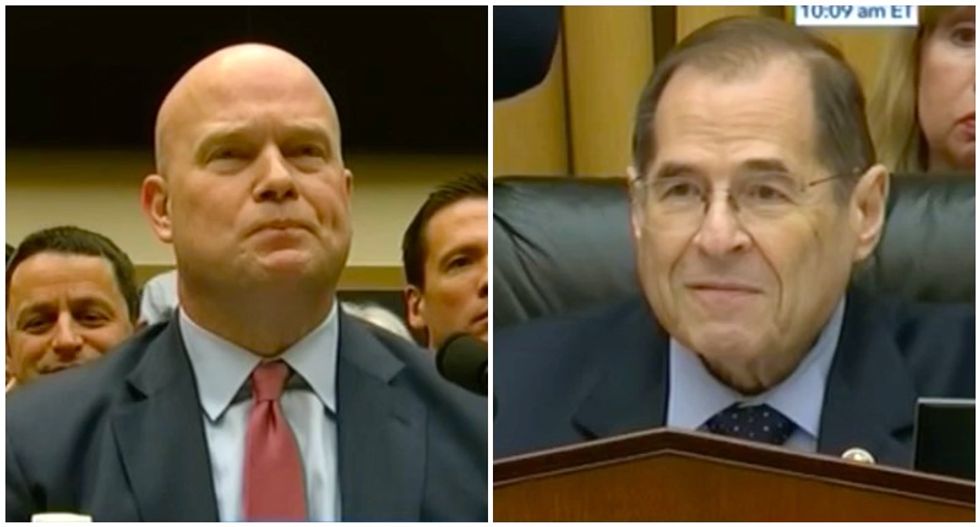 Lawmakers gasped after acting attorney general Matt Whitaker tried to beg out of questions about special counsel Robert Mueller by telling a committee chairman his time was up.

House Judiciary Committee chairman Jerry Nadler (D-NY) asked Whitaker whether he had discussed the Mueller probe with the president or senior White House officials -- which the acting attorney general said he had not done -- and he then pressed him on oversight of the special counsel.

"In your capacity as acting attorney general have you ever been asked to approve any request for action to be taken by the special counsel?" Nadler said.

Whitaker then tried an unusual move to wriggle out of answering.

"Mr. Chairman, I see that your five minutes is up and so," Whitaker said, as the chamber erupted in shocked gasps and laughter.

"I am here voluntarily, we have agreed to five-minute rounds," Whitaker said.

Nadler stopped chuckling to call the committee to order, and he pointed out the five-minute rule was not enforced on Whitaker's opening statement.

"That might be a good breaking point," suggested ranking Republican Rep. Doug Collins (R-GA), but Nadler said the acting attorney general was in the middle of answering a question.

Whitaker asked him to repeat the question, and he did.

"In your capacity as acting attorney general have you ever been asked to approve any request for action to be taken by the special counsel?" Nadler said.

After a long pause, Whitaker said he had exercised his authority as acting attorney general over the special counsel.

"So I assume the answer is yes?" Nadler said.

Whitaker said he did not understand the question, so Nadler repeated it, as Collins repeatedly called "point of order."

"I want to be very specific about this, Mr. Chairman," Whitaker said, "because I think it will allay a lot of fears that have existed among this committee, among the legislative branch largely and maybe amongst some American people. We have followed the counsel's regulations to a tee. There's been no event, no decision that has required me to take any action and I've not interfered in any way with the special counsel's investigation."