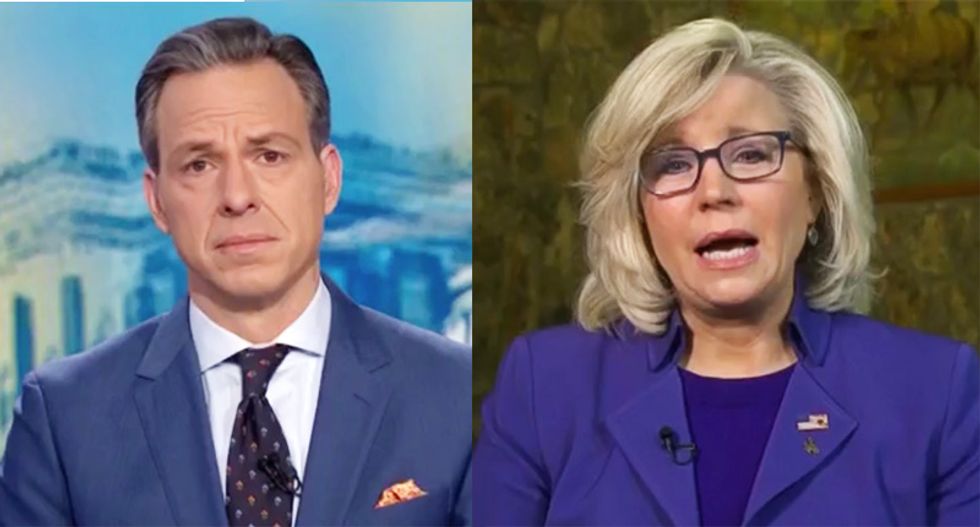 Appearing on CNN's "State of the Union," the third-ranking Republican in the Democratic-held House brushed aside a question about President Donald Trump making another offensive attack on Sen. Elizabeth Warren (D-MA) to call the Massachusetts senator a "laughingstock."

Speaking with host Jake Tapper, Rep. Liz Cheney (R-WY) ignored Tapper's specific question about Trump's tweet, where the president made a glib joke about the Trail of Tears -- a reference to a shameful genocidal moment in U.S. history.

"Look at something the president tweeted left night," Tapper began. "'Today Elizabeth Warren, sometimes referred to by me as Pocahontas, joined the race for president. Will she run as our first Native American presidential candidate or has she decided after 32 years that is not playing well anymore. See you on the campaign trail, Liz.'"

"The word trail is in all caps and he made a joke talking about Wounded Knee when talking about Elizabeth Warren," Tapper continued. "You represent thousands of Native Americans in Wyoming. -- do you worry about the president joking about these horrific tragedies? "

Cheney skipped right by the attacks and launched her own attack on Warren.

"You know, I have concerns about somebody like Elizabeth Warren pretending to be Native America," she shot back. "You are absolutely right, I do represent thousands of Native Americans here in Wyoming, and the notion that anybody of any political party would pretend that they were a member of a tribe or pretend they were Native American and would do it as she seems to have done it in order to get benefits, that is, in my view a disgrace."

"I think she's made herself a laughingstock" she added.

'I hear what you're saying about Elizabeth Warren," Tapper blandly replied. "But what about the language the president uses and the joking references to genocide against Native Americans?"

"Look, Elizabeth Warren has made herself a laughingstock," Cheney accused again. "I don't think anybody should be surprised that that's been the reaction to her and to her continued claims. We saw just last week, you know, that she said she was a Native American on her application for membership in at least one state bar association."

At that point host Tapper ended the interview.