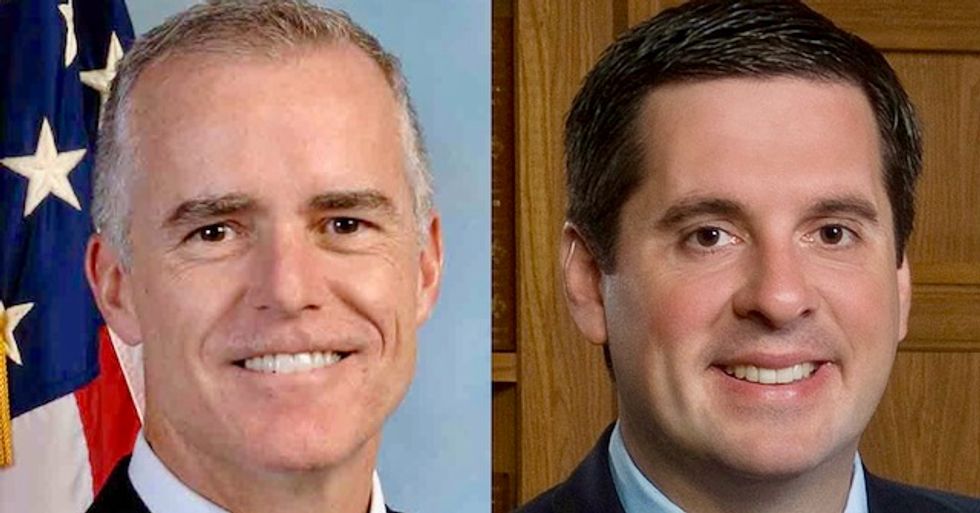 Former Acting FBI Director Andrew McCabe revealed Tuesday that he had briefed the "Gang of 8" that the Bureau was opening up a counter-intelligence investigation into President Donald Trump, and in a bombshell remark, said that "no one objected." The FBI opened the unprecedented investigation just days after Trump fired FBI Director Jim Comey, although it had been looking at Trump for months.

The Atlantic's Natasha Bertrand interviewed McCabe for an article published Tuesday. He insists he was fired because he opened the investigation into President Trump.

"McCabe told me that his guess is that the White House 'immediately knew the steps I took after Jim [Comey] got fired, and the cases I opened' because of [Chairman Devin] Nunes," Bertrand writes on Twitter.

"When I was surprised to see Nunes at the briefing, I knew it would happen very quickly," McCabe told her, she adds.

She also points to a quote from McCabe's book, "The Threat: How the FBI Protects America in the Age of Terror and Trump," which was released today.

"We felt like we had credible, articulable facts to indicate that a threat to national security may exist,” McCabe told Bertrand, which she reports in The Atlantic. She adds, "FBI officials felt this way, he said, even before Trump fired Comey."

In their interview, McCabe tells Bertrand why the Bureau opened the counter-intelligence investigation into Trump, saying that Trump's obstruction of justice and possible threat to national-security are "two sides of the same coin."

"We were concerned," McCabe says, "and we felt like we had credible, articulable facts to indicate that a threat to national security may exist. And, in fact, that a crime may have been committed: obstruction of justice. My own view of it is that those two things, the obstruction and the national-security threat, are inextricable. They are two sides of the same coin. "

TRUMP: DEVIN NUNES SHOULD GET ‘THE MEDAL OF HONOR’ FOR COORDINATION WITH WHITE HOUSE TO HALT RUSSIA PROBE

NATIONAL SECURITY EXPERT: DEVIN NUNES KNEW HIS CONSPIRACY THEORIES WERE LIES – BUT HE TOLD THEM ANYWAY

MADDOW BOMBSHELL: DEVIN NUNES CAUGHT ON TAPE SAYING ‘WE’RE THE ONLY ONES’ TO PROTECT TRUMP