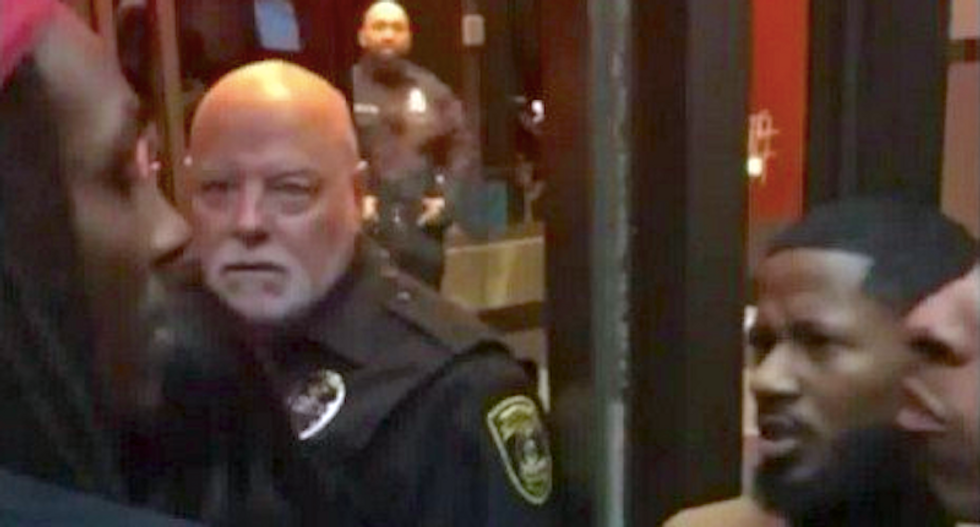 A black Missouri man was humiliated during his birthday party after a waitress gave up on his group -- and managers called police to escort them out.

Terrence Dickerson, a chef and recording artist, made reservations for 30 friends and relatives Saturday at Blue Sky Tower Grill in Richmond Heights, but he said the group was kicked out before the party was set to end, reported KTVI-TV.

“We wanted to have a good time and a birthday celebration, they treated us like we're not supposed to be there,” Dickerson said. “It made us feel like a criminal. It made me feel like we were breaking the law, and we were not."

Dickerson said he signed a contract reserving a party space at the restaurant, and he showed the TV station an email showing that guests could pay for their food and drinks on separate checks but would be each charged 20 percent gratuity.

However, Dickerson said the waitress refused to serve the group because she felt overwhelmed by the large party.

"She left and never came back," he said. "The next message we get is the police want you to leave."

Restaurant representatives declined to comment, but police said they were called at 8:20 p.m. for a report of a possible disturbance at the restaurant, and they sent seven or eight officers to investigate.

"We quickly found out that it was not a disturbance, just a misunderstanding over how the group would be billed, if it would be one check or an individual check. When we arrived, the restaurant came to an agreement and was working with the group,” said Chief Doug Schaeffler, of Richmond Heights police.

At least one of Dickerson's guests recorded video of the incident that has been widely shared on social media.

Dickerson told the TV station that he believes the restaurant assumed he and his guests would not pay their bill because they are black, and he was embarrassed after they were forced to line up in single file and pay before they were escorted out.

“Very embarrassing," said friend Hofton Nelson. "Police told everybody we had to go upstairs because it was a bad look on the place. I told him the fact that we have a black party of 30 and we have a contract to be up here, it looks bad because you have eight police officers here, and no laws are being broken."

“Saturday’s incident is sadly not a surprise," said the St. Louis County NAACP in a statement. "As we look at the Missouri attorney general’s traffic stop data, it is simply a reflection of the reality of racial profiling in areas of St. Louis and across the state. The family underwent what many would call ‘dining while black.’”