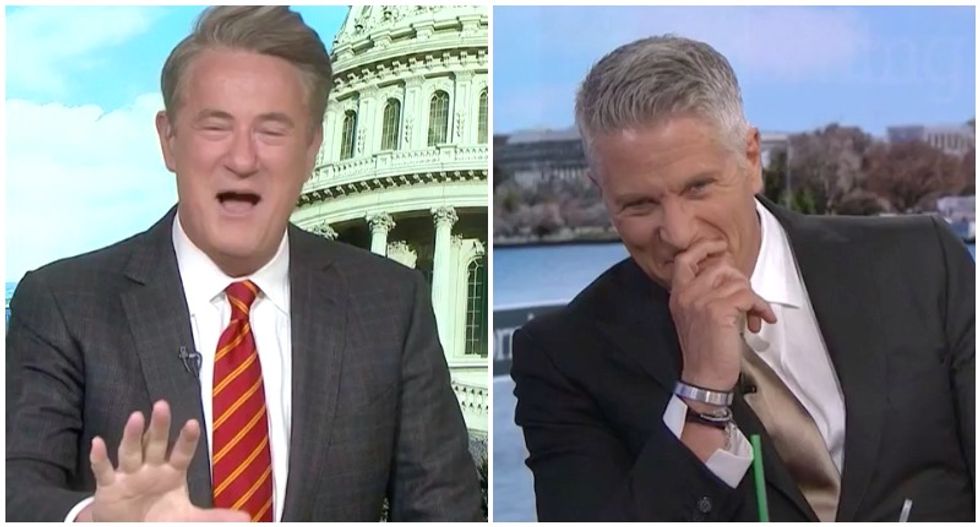 MSNBC's Joe Scarborough cracked up other "Morning Joe" panelists with a disgusting comparison between President Donald Trump doubling down on border security and the New Coke debacle.

Trump already forced a deeply unpopular government shutdown over funding for his border wall, and he is again threatening to send U.S. troops to the border to stop caravans of migrants -- just as he did ahead of the midterm elections.

"If you just look at vote total in the history of America for any midterm election, (Republicans) lost by more than any other party ever, they lost more seats than at any time since Watergate," Scarborough said. "Then this (president) decides he's going to double down on that -- remember the strategy going into that election was the fake caravans, the fake border crisis, the fake need to send troops down to the border, right?"

"It failed historically," he added. "This is like from Coca-Cola to New Coke, right?"

MSNBC contributor Donny Deutsch laughed and said that was exactly the comparison he was going to make, but Scarborough took the analogy even further.

"Except now we're moving from New Coke," Scarborough said. "It would be as if the board of directors in Atlanta, Georgia, for Coca-Cola said, and forgive me for saying it this morning, 'Hey, you know what, New Coke didn't work, so we're going to add cat urine to it.'"

The other panelists burst into laughter, as co-hosts Mika Brzezinski and Willie Geist looked to each other for help stopping him.

"It's the worst it's ever been in history, the worst loss since Watergate," Scarborough said. "He's doubling down on the strategy, and now his answer is -- and this is where our cat part comes in -- he's going to continue, but now he's going to violate the United States Constitution, right, and he's going to have the Supreme Court most likely overturn his decision (to declare a national emergency) unanimously."

"This is a board of directors that -- I mean, they got to step in to save themselves," he added.

"It would be like bringing back the wall now and say, not only are we going to have the wall, we're going to embroider the wall -- that's going to make the difference here," Deutsch said. "I go back and it seems like a thin response and a cheap shot, and you've got nothing else to say, (but) he's insane."