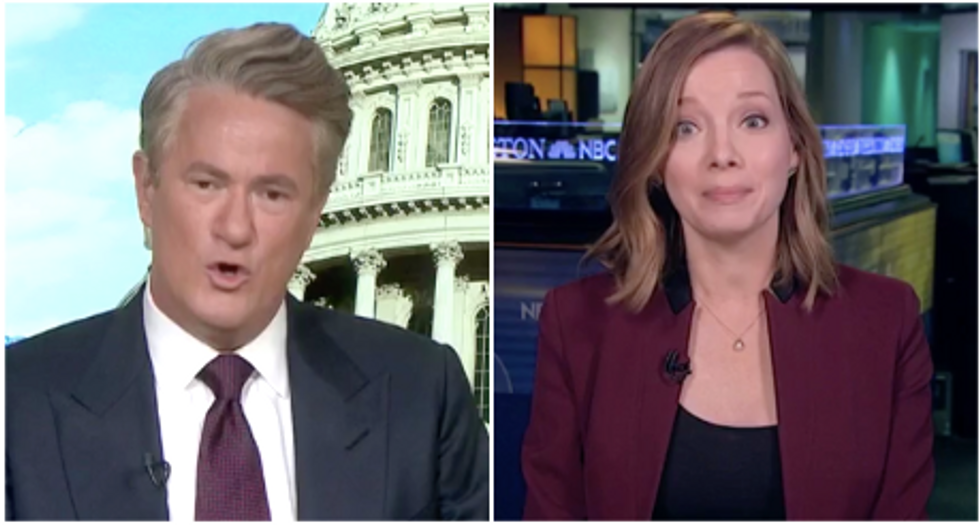 MSNBC's Joe Scarborough shouted down a conservative guest who tried to absolve President Donald Trump of blame for his followers threatening or committing acts of political violence.

A Coast Guard lieutenant reportedly threatened the "Morning Joe" host as part of a white nationalist plot, and Washington Examiner columnist Kristen Soltis Anderson suggested it was unfair to blame Trump for all the recent acts of violence toward journalists.

"There's a really big difference between saying, you know, I don't know that I can trust everything I see in the news, and, I'm going to go Google search to try to figure out how I can cause physical harm to reporters," Anderson said. "There's a huge leap there. There are always crazy individuals out there."

"We had the newsroom shooting that tragically took the lives of some journalists in Annapolis not too long ago," she added. "That was inspired by local issues. The shooting of Gabby Giffords back during the Obama administration, it wasn't inspired by politics, it was inspired by a man with severe mental issues who thought that things like the money was being manipulated."

Scarborough interrupted and asked what the lieutenant's plot was inspired by, or bombs mailed to Trump critics by a fanatical supporter or a Pittsburgh synagogue shooting carried out by a man who cited Trump to justify his actions.

"Hundred percent, inspired by rhetoric from the president," Anderson agreed, as Scarborough peppered her with questions.

"My point is," she continued through crosstalk, "even in the absence of President Trump, you have individual who are unstable and they're adding additional comments to that existing recipes is a recipe for bad."

Scarborough challenged Anderson to explain how the Pittsburgh shooter and pipe bomb mailer weren't inspired by the president.

"Joe, you have put words in my mouth," Anderson said. "I'm not saying this is not because of the president, I'm saying you already have existing layers of crazy, and when you have additional rhetoric added into that it creates a more unstable situation."

Co-host Mika Brzezinski then interrupted to say Anderson was letting the president off the hook, but she disagreed.

"I 100 percent think President Trump views this like pro wrestling and no one is going to get hurt," Anderson said. "My point is, in the absence of rhetoric, these are already dangerous professions professions -- the media, politics -- and viewing it like pro wrestling and I can say things like it doesn't matter is a dangerous thing for the president to be doing, and I wish he would stop."

Anderson then said Trump might just not believe he was responsible for the violence committed by his supporters, which Scarborough and Brzezinski dismissed as ridiculous.

"He would have to be mentally impaired," Scarborough said, "after seeing 11 people gunned down in a synagogue inspired by Donald Trump's words, to see a guy sending pipe bombs around to try to threaten or hurt or kill, again, people that Donald Trump has attacked as his political opponents, his political enemies."

"And now this Coast Guard situation where this guy had stockpiled weapons for some time," he added, "and had a plan to go out and gun down people that Donald Trump identified as his enemies on Capitol Hill and in the press. How could Donald Trump not be aware that his words have actually led to violence and are inspiring others unhinged to commit further acts of violence?"