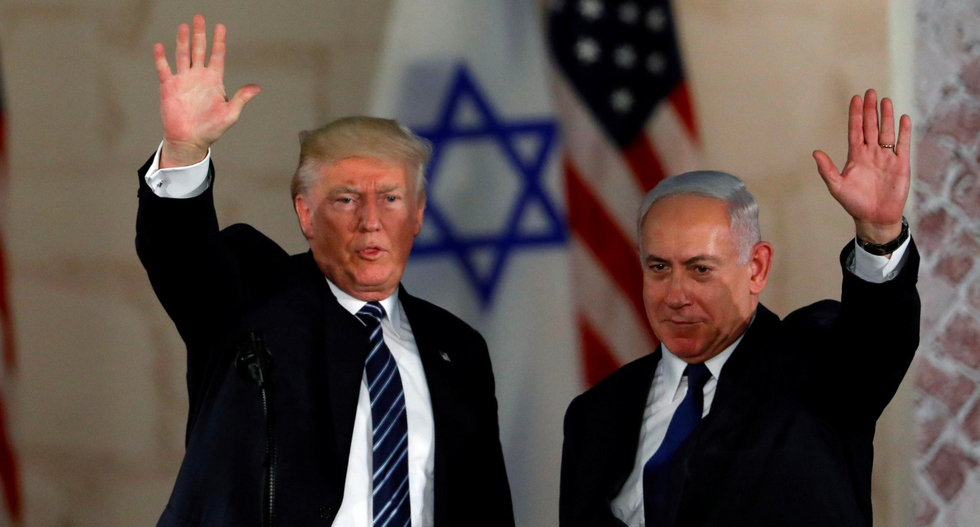 A giant billboard of a smiling Donald Trump shaking hands with Prime Minister Benjamin Netanyahu loomed over a main entrance to Tel Aviv on Sunday, part of the Israeli leader’s re-election campaign.

Trump is popular in Israel because of his tough policies toward the Palestinians and Iran and his transfer last May of the American Embassy from Tel Aviv to Jerusalem, which he recognized as Israel’s capital in a break from long-standing U.S. policy.

“Netanyahu. In another league,” read the Hebrew-language billboard, in a swipe at the caliber of the veteran prime minister’s opponents in the April 9 national election.

A spokesman for Netanyahu’s right-wing Likud party, whose logo adorns the sign over Tel Aviv’s busy Ayalon highway, did not immediately respond to a Reuters query on whether the White House had authorized it to use the photograph.

Netanyahu is favorite to win the election but opinion polls show one of his toughest challengers, former general Benny Gantz, making gains.

The prime minister is facing possible charges in three graft cases. He denies any wrongdoing and has called the investigations a witch-hunt.

On Friday, Israel’s attorney general said there was no legal reason to prevent him from announcing, before the election, any intention to indict Netanyahu on corruption charges should he decide such a move was warranted.

Formal indictment in court would depend on pre-trial hearings, likely to be held only after the poll.