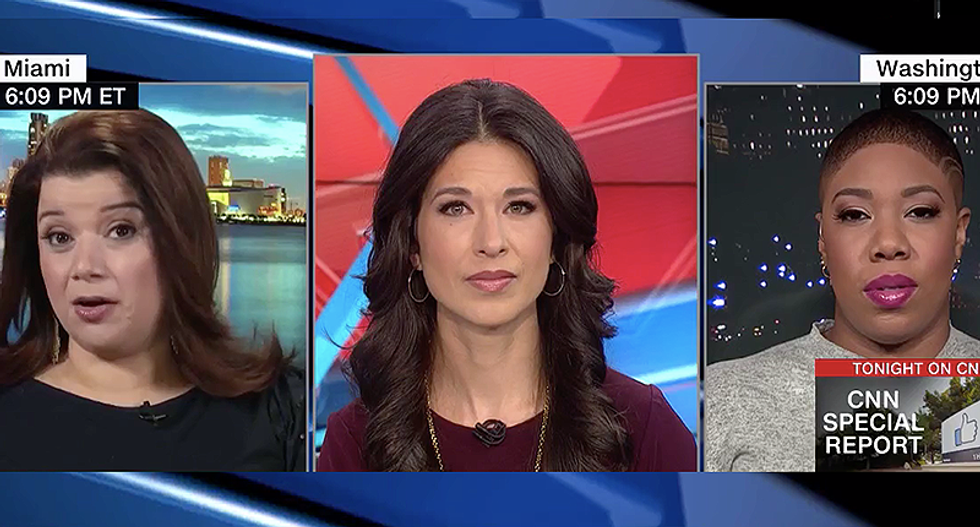 President Donald Trump tried to attack Sen. Amy Klobuchar (D-MN) because she held her announcement outdoors in the snow in her home state.

"Well, it happened again. Amy Klobuchar announced that she is running for President, talking proudly of fighting global warming while standing in a virtual blizzard of snow, ice and freezing temperatures. Bad timing. By the end of her speech she looked like a Snowman(woman)!" Trump tweeted Sunday.

Trump has made the same climate change joke before because he doesn't seem to understand the science of extreme weather created.

However, CNN's Ana Navarro found irony in the tweet in which he mocked Klobuchar for standing in the snow.

"It made me chuckle, frankly, and roll my eyes," Navarro said. "This is a guy who skipped a visit to a U.S. cemetery in France of U.S. veterans because he, poor baby, was afraid to get his little hair wet. And so, I think taking on Amy Klobuchar, attacking her for standing in the middle of a snowfall in her home state -- it might not be the hill he wants to die on. Might not be the smartest line of attack for Trump."

She went on, saying she's noticed him be careful about Sen. Kamala Harris (D-CA). But if calling Klobuchar "snow woman" is the best he can come up with, Navarro said, "that's not much of a nickname from where he comes from."

Trump has been notorious for labeling political foes with nicknames. Navarro said he's great at branding things, but encouraged him to go back to the drawing board for this one.