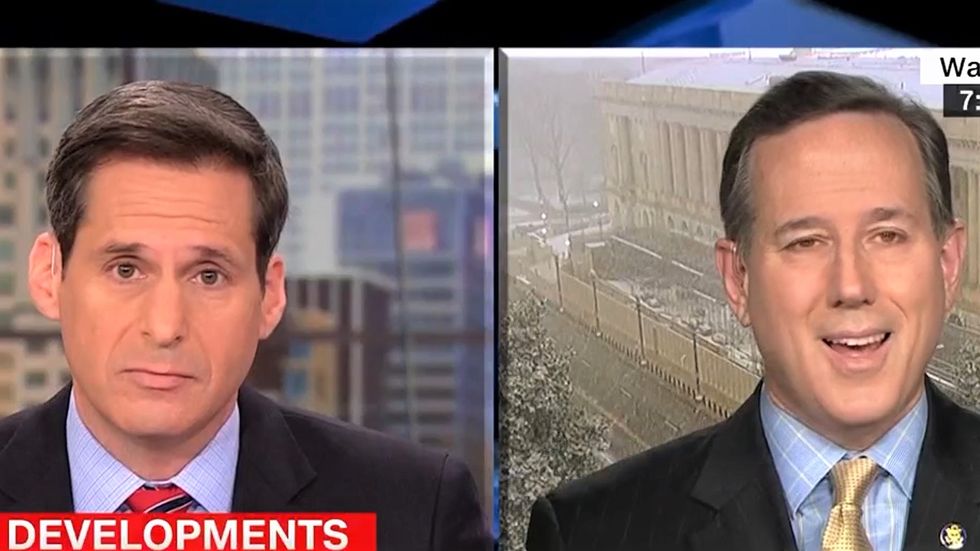 Trump defender Rick Santorum had a difficult time on Wednesday responding to questions about President Donald Trump's reported interference into federal investigations into him and his associates.

In the wake of a bombshell New York Times report that Trump asked former acting Attorney General Matt Whitaker if he could install a political loyalist to oversee investigations being run out of the U.S. Attorney's Office for the Southern District of New York, Berman asked Santorum if the president should have known better than to do that a full two years into his first term.

"The president of the United States has -- is the chief executive of the country," Santorum said. "He has -- he has the right to talk to his officials about the way things, you know, the conduct of investigations, even when it comes to him, and the president obviously didn't order or force Mr. Whitaker to do that. He made comments about things or maybe even, you're reporting, mused about things that he didn't like about the investigation. Is that -- is that improper? I would say no. Is it wise? No. But i don't think it's improper behavior on the part of a president."

Elsewhere in the segment, Berman asked Santorum why Rep. Devin Nunes (R-CA) raised no objections when former deputy FBI Director Andrew McCabe informed him that the FBI was opening an investigation into the president -- and Santorum again squirmed.

"Well, look, I've been in a lot of those briefings and you sit there and take the briefing and you then try to find out what, you know, what's true and what's not true from what you've just been told," Santorum said. "And I'm not surprised that he wouldn't necessarily object at that moment because probably a lot of the information was new and you don't want to just start flailing away. You want to do your background checking and then you come back with maybe an informed position to counter what Mr. McCabe had said."