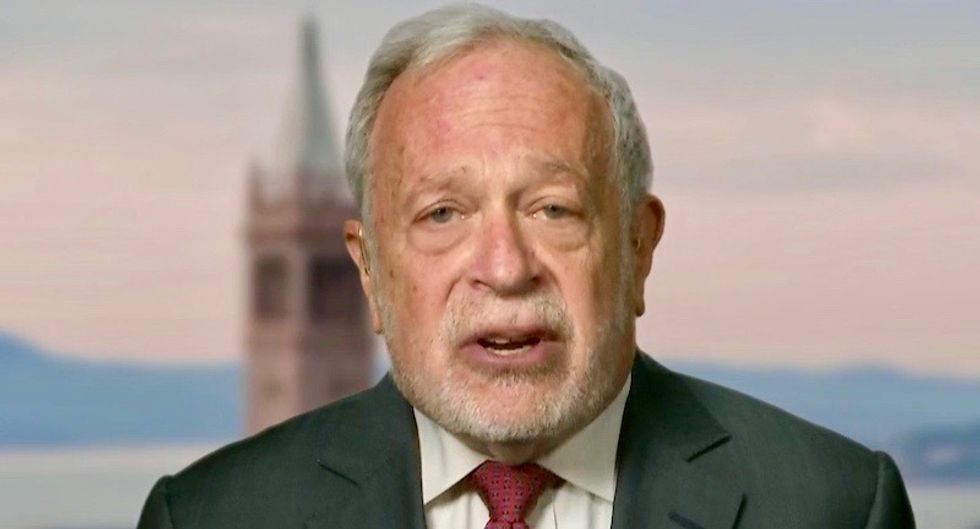 While President Donald Trump proclaimed that "America will never be a socialist country," what he's done for the top one-percent has done exactly that, according to class warrior Robert Reich.

Government workers are bracing for another shutdown after over 800,000 federal workers, and an unknown number of government contractors were barred from going to work.

"In the conservative mind, socialism means getting something for doing nothing," wrote Reich for The Guardian. "That pretty much describes the $21bn saved by the nation’s largest banks last year thanks to Trump’s tax cuts, some of which went into massive bonuses for bank executives. On the other hand, more than 4,000 lower-level bank employees got a big dose of harsh capitalism. They lost their jobs."

Most Republicans forget that the United States already employees socialist policies. Reich cited the banks being bailed out as one example. he noted they scored a subsidy of $83 billion a year out of fear they would "fail." When the big automakers were struggling, they were also given a chunk of change to stay alive.

"Under socialism for the rich, you can screw up big time and still reap big rewards," Reich wrote.

So, basically, Trump promotes socialism but only for the rich, while the rest of America is forced into what Reich called "harsh capitalism."

"When he was in business, Trump perfected the art of using bankruptcy to shield himself from the consequences of bad decisions – socialism for the rich at its worst – while leaving employees twisting in the wind," Reich recalled. Today, other CEOS are following suit while their workers are laid off.

Sears is the latest example of a company that drove itself into bankruptcy and gave workers their pink slips.

Pacific Gas and Electric is in a disaster situation after they neglected to maintain electrical wires so fires could be prevented. Lives were lost as a result of fires PG&E's faulty equipment that sparked a blaze. Rather than do the work or pay out the inevitable lawsuits, PG&E will file toward bankruptcy and get off scot-free.

There are dozens of more examples, Reich outlines.

Meanwhile "around 60 percent of America’s wealth is now inherited," he continued. "Many of today’s super-rich have never done a day’s work in their lives." Nice work if you can get it. It's not exactly the best example of capitalism either.

"America is on the cusp of the largest inter-generational wealth transfer in history. As rich boomers expire over the next three decades, an estimated $30tn will go to their children," he wrote. "Those children will be able to live off of the income these assets generate, and then leave the bulk of them to their own heirs, tax-free."

Reich predicted that after a few generations of this, all of the wealth would be back in the hands of a few thousand non-working families.

"To the conservative mind, the specter of socialism conjures up a society in which no one is held accountable, and no one has to work for what they receive. Yet that’s exactly the society Trump and the Republicans are promoting for the rich," Reich warned.

"They need thicker safety nets and deserve a bigger piece of the economic pie. If you want to call this socialism, fine. I call it fair," he closed.

Check out the full op-ed at The Guardian.

Austrians expressed shock and anger this week over the suicide of doctor who had been the target of a torrent of abuse and threats from anti-vaccination protesters.

The bells of Vienna's St. Stephen's Cathedral rang out in memory of Lisa-Maria Kellermayr on Monday, and hundreds of people held a candle vigil outside, after the 36-year-old doctor was found dead at her practice on July 29.