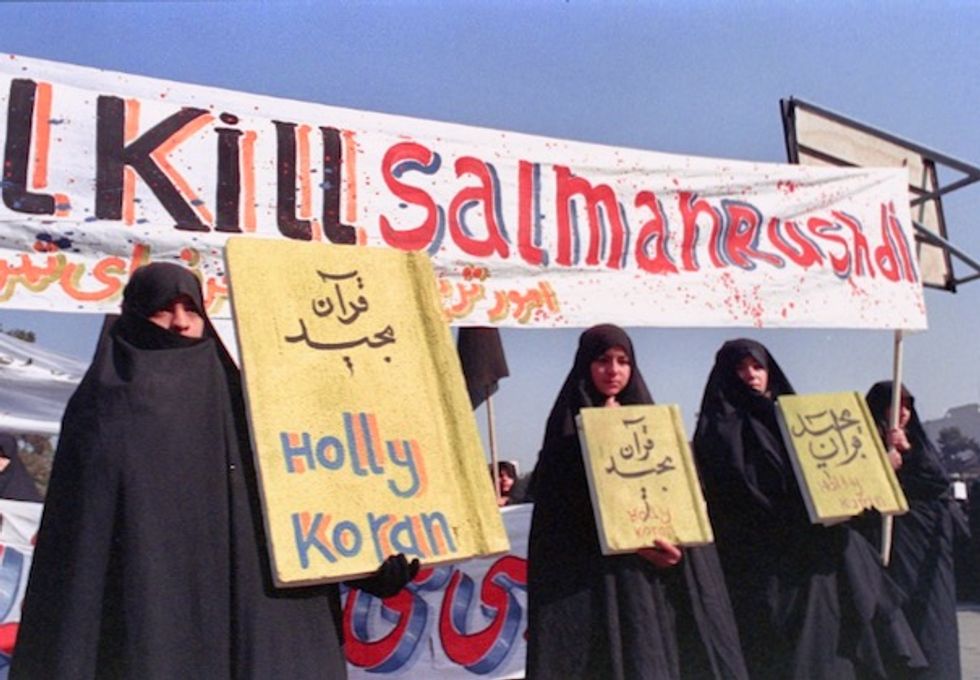 Thirty years after Iran called for the killing of Salman Rushdie, the British novelist remains a figure of hate for extremists across the Muslim world, and though the level of outrage has dropped, the issue of blasphemy is as incendiary as ever.

Rushdie's novel "The Satanic Verses" triggered mass protests from London to Islamabad and, analysts say, closed down the space for debate around Islam in a way that still resonates today.

A day earlier thousands of protesters enraged by the novel's publication had attacked the American Cultural Centre in Islamabad. Five people were killed in the ensuing clashes with police.

Pakistani journalist Shahid ur Rehman told AFP he was among the first to arrive on the scene that day, and watched as men stormed the roof of the centre and pulled down its American flag while police fired tear gas, then live bullets.

Rehman said the novel came as a rude shock to a Muslim world which was "basking in glory".

The Iranian revolution was just a decade old and the Soviet Union was on the verge of a collapse after being driven out of Afghanistan by the US-backed mujahideen, with Muslims in general and Pakistan in particular claiming credit for the defeat of an empire.

Rushdie's novel, and the fatwa which followed, were "like a dam breaking", Rehman said.

Today, the novelist is "hated as much... as he was hated back then", said Pakistani religious scholar Tahir Mahmood Ashrafi.

But "people cannot protest consecutively for 30 years," he added.

Anger over blasphemy remains effervescent among Islamic hardliners, however.

In the last ten years in Pakistan, politicians have been assassinated, European countries threatened with nuclear annihilation and students lynched over the issue.

The case of Asia Bibi -- a Christian woman whose death sentence for blasphemy was overturned in Pakistan last year, sparking days of violence and drawing global attention to religious extremism in the South Asian country -- is just the latest example.

Ashrafi said the publication of the novel "justified" laws against blasphemy -- without them, he argued, "people like Rushdie will keep hurting the religious sentiments of Muslims".

Even calls to reform the laws have provoked violence in Pakistan, and for some the fatwa helped blur the lines between blasphemy and intellectual debate across the Muslim world.

Analysts such as Khalid Ahmed, author of a book on Pakistan's sectarian divide, say the fatwa marked the beginning of a "terrible decline" of intellectual discourse in Islam.

Khomeini's call for blood was "catastrophic for the freedom of creation, literature and thought", Egyptian journalist and novelist Ibrahim Issa said.

Other fatwas had been issued against writers in the past, he said -- but usually by small, extremist groups. Khomeini's was the first issued by an Islamic state.

"It was a dark moment that, thirty years later, reminds us how dangerous the interference of religion in freedom of expression (is)", he told AFP.

Iran's supreme leader Ali Khamenei has on numerous occasions reiterated the verdict on Rushdie, most recently in 2015.

The Iranian government vowed it would not act on the fatwa in 1998, but such decrees are "not revocable", Mehdi Aboutalebi, cleric and doctor of political science at the influential conservative think-tank Imam Khomeini Educational Research Institute in Qom, told AFP.

"Even if 800 years pass, the sentence remains the same," he said.

The fatwa has caused multiple diplomatic rows over the years —- as have other cases of blasphemy, such as the controversy over satirical Danish cartoons of the Islamic prophet printed in the right-wing Jyllands-Posten newspaper in 2005.

Politics and religion are often intertwined in Iran, Aboutalebi explained, echoing a sentiment expressed in other Muslim countries.

"For instance, Iran's quarrel with US is not over money or economy.... This is all about our beliefs and our religion," he said.

The fatwa shows "we will not tolerate anyone breaking our belief boundaries".

Today the furore over Rushdie interests only "the most radical ayatollahs", said Clement Therme, research fellow at the Iran International Institute for Strategic Studies.

Iranians are experiencing "revolutionary fatigue", he said, as Tehran hunts for friends amid criticism over its regional policies and disputed nuclear programme.

"In a context of increased isolation of Iran, realpolitik requires Iranian leaders to avoid escalation on this issue," Therme said.

In Pakistan, where Rushdie's books have been available on the black market for years, "Joseph Anton: A Memoir" -- which recounts his time in hiding after the fatwa -- is quietly but openly on sale in at least one bookstore in the capital.

However most booksellers remain cautious.

"There is a religious issue," one of them, who gave his name as Ayaz, told AFP.

"That's why we can't display (Rushdie's books) and also can't order them."