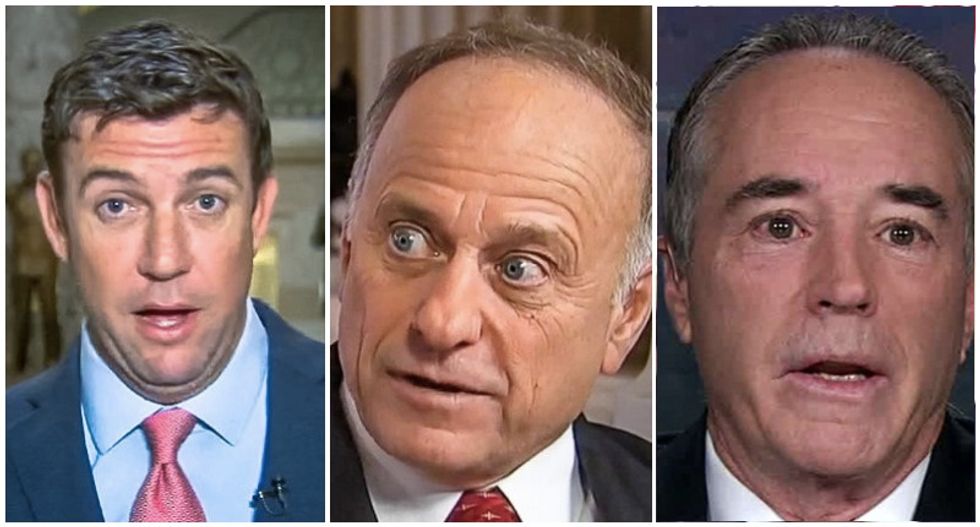 Three Republicans have been pulled from any committee or leadership positions as a result of their own stupidity. While the rare act of ethics is commendable, it means three Congressional districts don't have much of an elected official.

Rep. Duncan Hunter (R-CA) was barely reelected as he faced an epic scandal where he's accused of using campaign cash to fund his family's lavish lifestyle.

Rep. Chris Collins (R-NY) is in a similar boat after it was announced he was being indicted for securities fraud.

These three districts may have constituent services and a voting member, but they don't have the advocate that they once did, according to Politico.

"Now, while the rest of their colleagues work on crafting bills, the trio of committee exiles are searching for ways to spend their time on Capitol Hill so they’re not just waiting around to vote or aimlessly roaming the hallways," the site reported Monday.

“I suppose they can form a ‘pariah caucus,’” said Rep. Jamie Raskin (D-MD).

“I’m disappointed, but I’m making the best of it,” Collins told Politico. “Each day, you get up and you do your best. You can’t control what you can’t control. But in my case, you offset it.”

The act of booting a member off of their committees is a relatively new thing. Politico noted it was 2006 when a Democratic member of the Ways and Means Committee was being investigated and he was removed.

“You would obviously prefer to be on the committees,” Rep. Tom Cole (R-OK) said. “You know the old saying: Congress on the floor is Congress in theater. Congress in committee is Congress at work.”

Hunter and Collins will at least have a resolution in their court cases that could restore their powers if they're not found guilty. However, as their trials continue, they could be removed from their own voters.

It's unclear what Republicans intend to do with Steve King. His racist comments have been part of his persona for a very long time and they're likely to continue in the future. Republicans haven't managed to get him to leave Congress.