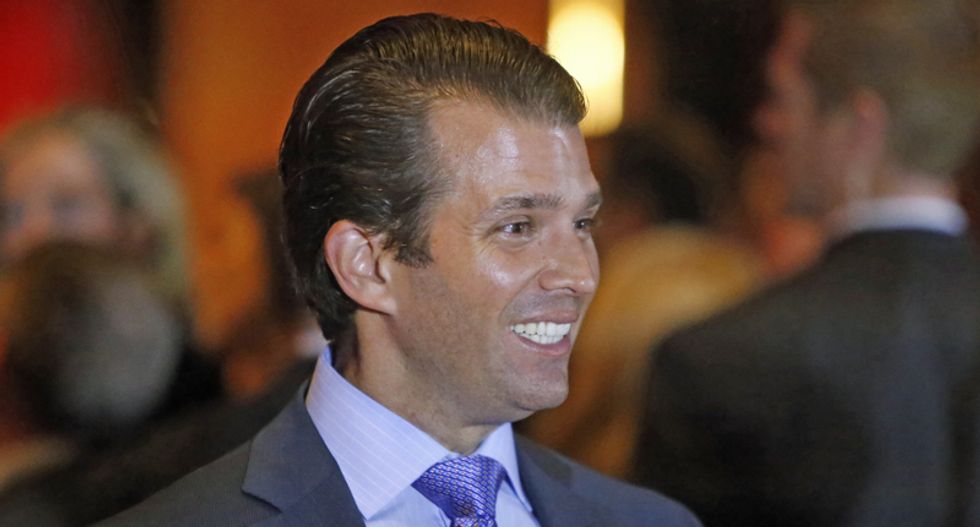 The eldest son of President Donald Trump on Wednesday lashed out at Instagram over claims of censorship.

"I always knew that social media was censoring me and other conservatives and my experiences this week only drove the point home. That said, I never knew it was this bad," Donald Trump, Jr. argued. "This is insanity!"

"The numbers must be huge and this kind of leftist activism and censorship must finally stop," he asserted. "The attack on free speech cannot be allowed to continue on platforms as large as Instagram and with as much reach."

Trump urged his followers to use specific hashtags, one of which misspelled 'censorship' as 'sensorship.'

"This is no longer a simple little error or coincidence as they keep claiming," Trump, Jr. argued.

Instagram, however, did not argue there was an error or coincidence.

Instead, a company spokesperson explained the situation is likely because of "spammy behavior" by Trump, Jr.'s followers.

“The ‘action blocked’ message is shown to people when we detect they may be taking part in spammy behavior, for example, liking multiple posts, following multiple accounts or similar. This is a measure we have in place to prevent spam on Instagram and isn’t specific to any one account," the company explained.

don jr ready to fucking rage because instagram temporarily restricts accounts that like too many posts at once https://t.co/QntlwGdqil
— Ashley Feinberg (@Ashley Feinberg)1550711727.0

Wow. I always knew that social media was censoring me and other conservatives and my experiences this week only drove the point home. That said, I never knew it was this bad. Here’s just a small sampling of DMs that I’ve gotten since I called it out yesterday. I put some together to protect people’s identity and to show the magnitude. This is insanity! Everything from 1) had to re follow you a few times in the last few weeks because I keep checking and they are unfollowing you for me 2) I’ve been blocked from liking certain conservative posts including The President of the United States 3) I’ve been locked out of my account for a time period for liking said content. 4) IG has me following liberal accounts automatically that I never wanted to follow. 5) I’m still following you but you never show up in my feed anymore 6) when I search Don Trump Jr you don’t even show up as a thing in the search function. Etc Etc... Now imagine how many people this is happening to. How many people aren’t seeing what they want to see and how many people are totally in the dark that it’s happening. If I’m getting dozens upon dozens of these comments in my DMs how many more are being effected that don’t know or wouldn’t take the time to DM an account that probably won’t see it? Just look at the comments in my post from yesterday morning of other like minded people chiming in there are thousands... and those are just the ones that I’m not being shadow banned from. The numbers must be huge and this kind of leftist activism and censorship must finally stop. The attack on free speech cannot be allowed to continue on platforms as large as Instagram and with as much reach. This is no longer a simple little error or coincidence as they keep claiming. This is a systematic and sustained one way attack. IF THIS IS HAPPENING TO YOU, I URGE YOU TO SCREEN SHOT IT EACH AND EVERY TIME AND POST IT ON ALL YOUR PLATFORMS SO WE CAN FINALLY GET THE TRUTH OUT AND OUT AND END TO THIS OPPRESSIVE NONSENSE. PLEASE HASHTAG #socialcensorship #censorship #igsensorship #fbcensorship #twittercensorship SO WE CAN ALL FOLLOW ALONG AND SEE THE TRUTH COME TO LIGHT.