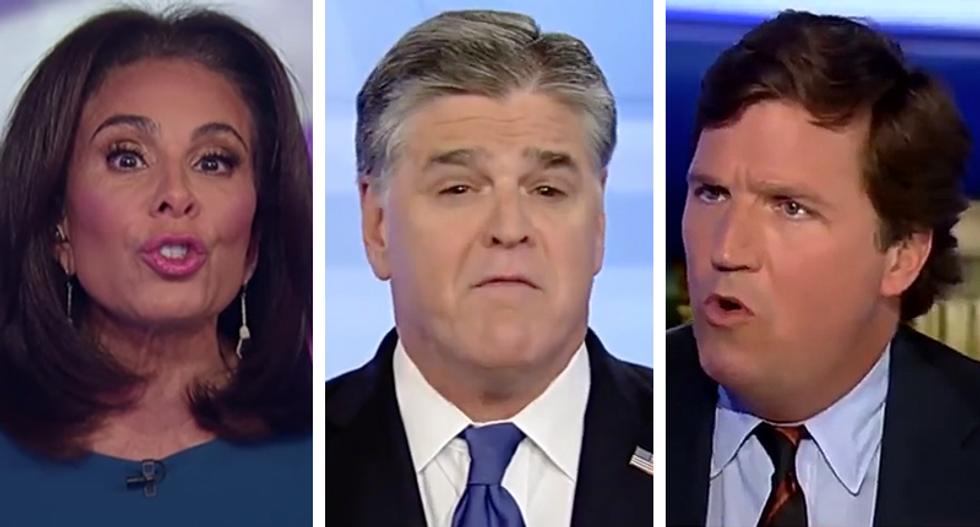 Documenting years of anti-immigrant bashing and demagoguery on the Fox News Network, the Washington Post's Erik Wemple said it has all finally paid off when President Donald Trump declared a national emergency along the southern border where no emergency exists on Friday.

According to the media critic, Trump's stunning declaration was the result of being outplayed by the Democrats after he shut down the government for 35 days and to appease his base which has been riled up by Fox News personalities like Sean Hannity and Tucker Carlson.

"Burned by his negotiating failures with Congress, President Trump on Friday morning declared a national emergency to get the money to build his border wall," Wemple wrote. "In doing so, Trump will put the worldview of his favorite hosts on Fox News, who for years have declared immigration and the southwestern border a national emergency, into action."

Noting a recent diatribe by Carlson where he said immigrants "make our own country poor and dirtier and more divided,” Wemple said that --despite those comments costing Carlson advertisers -- they rang a bell with Trump's base.

"Fox News prime-timers such as Carlson, Sean Hannity and Laura Ingraham might disagree on, say, tax policy or the role of the regulatory state or, perhaps, social issues. Yet they’re all hard-liners when it comes to immigration. The issue has become the litmus test that defines whether someone is a Fox News personality," the critic explained.

"The message: Don’t compromise," he continued. "That approach, indeed, has characterized Trump’s work on the issue over the past year or so. He appeared ready to sign on to a government funding bill in December but then backtracked after folks such as Rush Limbaugh and Ann Coulter complained that it didn’t contain funding for his border wall. So he shut the government down for 35 days."

According to Wemple, the roadmap that Trump followed was exactly the one plotted out by Hannity on Tuesday night, "... the president would need to declare a national emergency. This is the time. That is a necessity."

The Washington Post columnist dourly added: "It sure is, Trump said with his declaration of a national emergency. Years and years of hatred and hype on Fox News have prevailed."