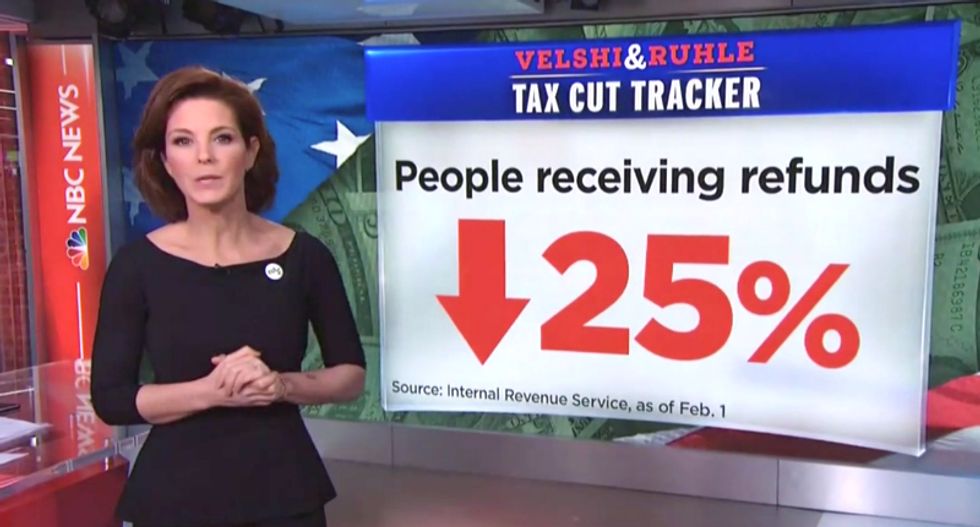 MSNBC's Stephanie Ruhle had a wake-up call for American taxpayers on Monday, saying that as a result of President Donald Trump's tax reforms, fewer people are getting refunds -- and it's the middle class that's taking the hit.

"When President Trump signed his bill into law, he promised more money in your pocket," Ruhle said as she ran a clip of the president's promises. "An average of $4,000 per household." But she added that the administration had been "vague" about the source of that extra income, leading many taxpayers to believe mistakenly that they'd be getting greater tax refunds.

"Early data from the IRS shows there are fewer refunds coming back so far this year," she said. "The total number of people receiving refunds is down by about 25%, and the refunds people are seeing are lower."

Ruhle cautioned that it was still early in the tax season, and that circumstances might change. But she added that many people might see "a smaller refund or no refund at all" when all is said and done "thanks to changes in the withholding tables." These changes, detailed by Vox explain how the Republicans' 2017 Tax Cuts and Jobs Act rejiggered withholding formulas to make the tax cut more palatable, but wound up hurting middle class families.

"If you wind up owing the IRS this spring," she said, "you can change your withholding now to prevent any surprise tax bills for 2019."