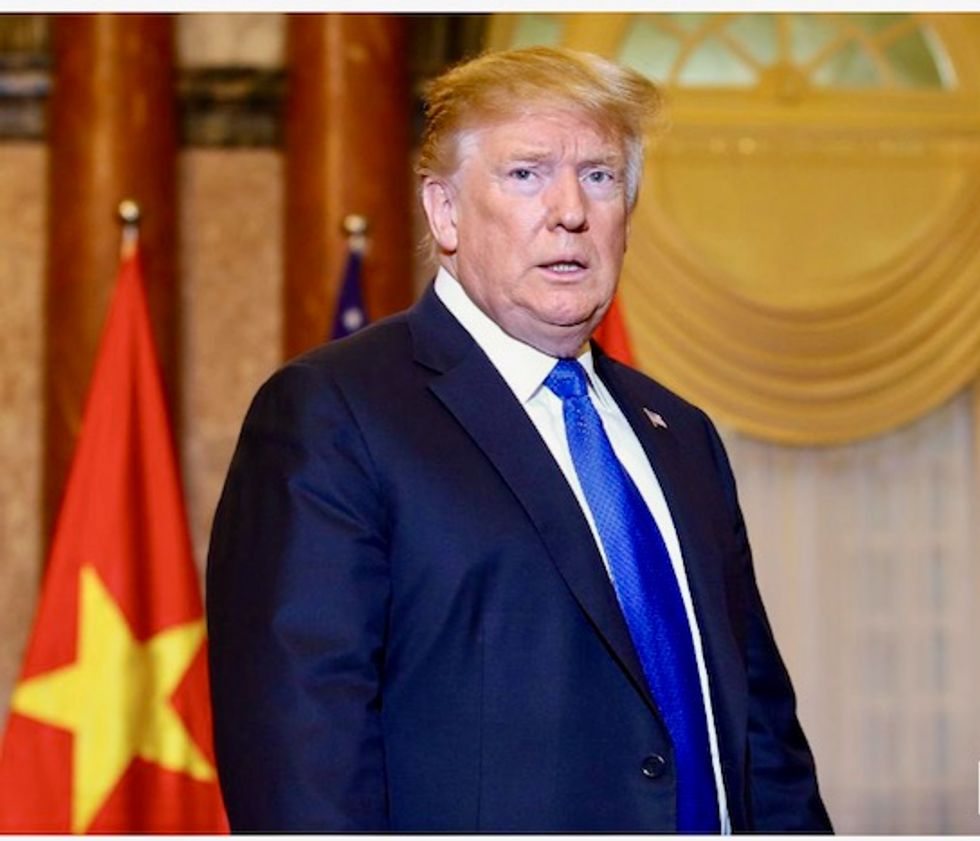 US President Donald J. Trump walks into a meeting room at the Presidential Palace to meet with Vietnamese President Nguyen Phu Trong in Hanoi, Vietnam 27 February 2019, ahead of the second summit between US President Trump and North Korean leader Kim Jong-un. Luong Thai Linh/Pool via Reuters

On Thursday, President Donald Trump's former fixer Michael Cohen was scheduled to appear before the House Oversight Committee for a second round of public hearings. Meanwhile, the President returned from Hanoi, Vietnam, having failed to secure a de-nuclearization deal with North Korean dictator Kim Jong Un.

It's a volatile time for the Trump administration, as Cohen continues to reveal Trump's secrets, including potential crimes and impeachable offenses.

Raw Story spoke with Prof. Bandy X. Lee, Yale forensic psychiatrist, president of the World Mental Health Coalition, and editor of The Dangerous Case of Donald Trump: 37 Psychiatrists and Mental Health Experts Assess a President, the second edition of which will be released next month.

Raw Story: You told Salon that if Donald Trump were not president, he would be contained and evaluated. What did you mean by this?

Prof. Bandy X. Lee: This sounds extreme, but it is actually a consensus among thousands of mental health professionals. Anyone posing as much danger as he is because of mental instability would have been evaluated long ago. We recently co-wrote an individual letter for Congress members, excerpted below.

"I write to you as your constituent and as a mental health professional and member of the World Mental Health Coalition. WMHC is a nonpartisan organization that brings the same criteria of concern to any national leader regardless of party affiliation. Our central concern is that Mr. Donald J. Trump shows multiple signs of impaired mental capacity that are paramount in fulfilling his duties as President of the United States. This constitutes an emergency, given such impairment could place numerous lives at risk," the letter reads.

Raw Story: Given this serious assessment, and now that Cohen is revealing all of Trump’s secrets, how do you think the president will take his betrayal?

Bandy X. Lee: I would focus less on Mr. Trump’s personal reaction and more on the dangerous implications he holds for public health. As health professionals, we are responsible for protecting our patients when they are in danger, but we also have a responsibility to protect the public.

Currently, our nation does not have a mechanism for mandating a psychiatric evaluation of presidents exhibiting erratic and potentially explosive behavior; medically, presidents have the same right to treatment as anyone. Legal and political mechanisms are not my domain as a psychiatrist, but protecting the mental health and safety of society is.

If political means are absent and the public is at risk, then health professionals must step up to do what is necessary as a function of public health and preventive psychiatry. Section 4 of the 25th Amendment, as I understand it, does not mandate evaluation or removal of a president unless the problem is obvious to nonspecialists. This leaves open vast territory, which is problematic because it will cover lesser dangers, such as when one is unresponsive or unconscious, but not the greater ones, such as when one is overly active as a result of psychopathy or paranoid delusions. These persons are especially dangerous because they can lure the public as do predators their prey, or pathologically ignite epidemics of violence. They are more dangerous than someone who is “just” a criminal, but the two are not mutually exclusive: the combination is worse.

Raw Story: Trump was just in Hanoi, Vietnam, to negotiate a deal that is supposed to denuclearize the Korean peninsula, but talks appear to have failed. How do you square that story with the Cohen testimony?

Bandy X. Lee: I don’t consider them so different. The Ancient Greeks asserted that character is destiny; this is even more true for character disorders, since impairment makes one more rigid and predictable. When the world was buoyant at the possibilities that would come from Mr. Trump’s agreeing to the first summit with Kim Jong-un, I warned South Koreans that, left to Mr. Trump, holding the summit would be more dangerous than not holding it.

When our own nation heaved a sigh of relief that the president was “settling in” after his first 100 days, we held a conference that led to the book, The Dangerous Case of Donald Trump, which warned that his condition was worse than people imagined—and would only grow worse over time. We relied on solid scientific research and clinical experience accumulated over decades to make our assessment, which has borne out to be true.

Raw Story: What is your recommendation?

Bandy X. Lee :To prevent this kind of perilous situation in the future, the World Mental Health Coalition’s recommendation is for all presidential and vice presidential candidates—and maybe someday lawmakers and Supreme Court justices—to undergo fitness for duty exams before assuming office.

Every police officer and military personnel, and even those who clean up toxic waste, are mandated to undergo such screening, and yet the commander-in-chief, who literally holds the power to destroy the world, is not. As a public service, we are forming an expert panel on medical criteria alone, to be nongovernmental and as removed from politics as possible. It will be available for consultation to any political body. Our hope is that presidential and vice presidential candidates will volunteer for a screening by this panel, to certify that they have the basic mental capacity to perform the duties of their prospective offices. Once it becomes routine, those who do not submit will themselves make potential unfitness known, since mental impairment goes hand-in-hand with an inability to consider even the possibility that one could be impaired. We will be holding a major, interdisciplinary conference in Washington, DC, next month to discuss how this may become the foundation for healthy, fit leadership of our and potentially all nations.