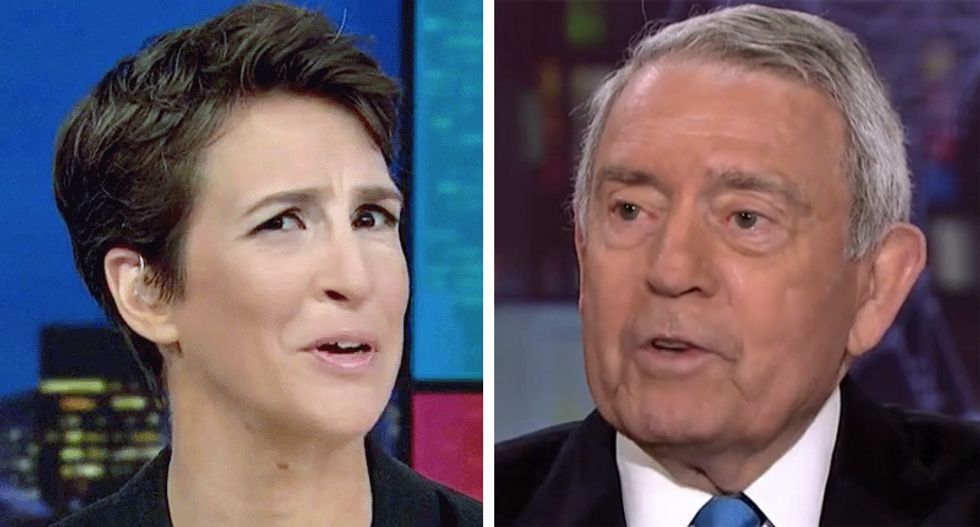 Composite image of Rachel Maddow and Dan Rather (screengrabs)

Legendary journalist Dan Rather joined MSNBC's Rachel Maddow on Thursday to analyze the prison sentence given to Paul Manafort for his crimes committed in the Eastern District of Virginia.

"Only once before in U.S. history has a president's campaign (chair) ended up going to federal prison," she reminded. "But at least when John Mitchell did it in 1975, Nixon was already gone."

"This time the president's campaign chair is going to federal prison while the presidential candidate he worked for is still in his first term as president of the United States," she noted.

Maddow asked Rather for reaction to Manafort only being sentenced to 47 months in prison.

"Well, I think it was historic," Rather replied. "As you pointed out, the campaign manager for what is now a sitting president going to jail -- there's no precedent for that."

Maddow asked what the "story of the day" would be.

"I think it will be about the lightness of the sentence," Rather predicted.

"Look, this sentence is a straight up rebuke to Robert Mueller and his team," he explained. "It's an in-your-face, shame on you statement from the judge to Mueller."

"And the sentence is just a slap on the wrist to, you know, a big-time criminal," he continued.

"A minor sentence for another elite, well-connected, Washington big-shot," he added.

"I will say, a lot of black kids in the projects routinely get worse get worse sentences than Manafort has gotten," Rather added.