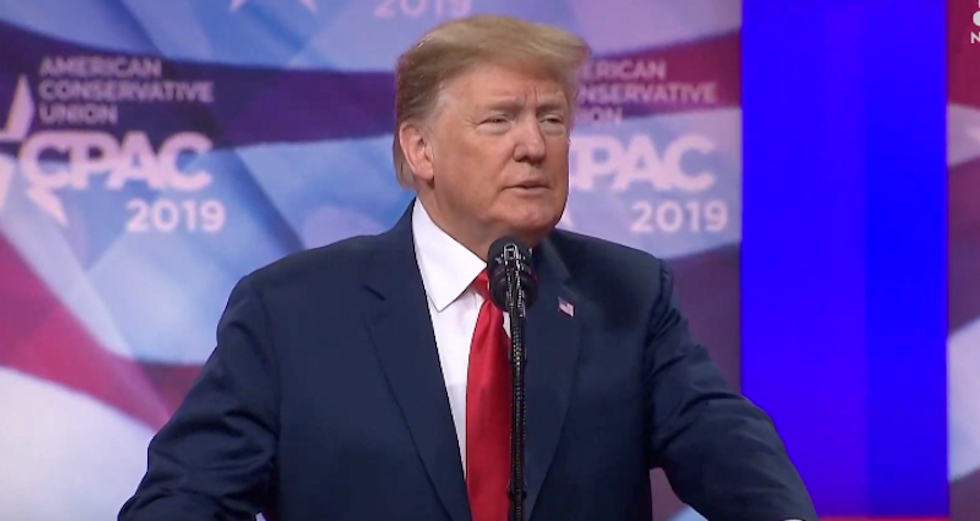 Donald Trump's expletive-laden speech at CPAC 2019 was the longest in his history — and Twitter couldn't help but dunk on him.

The ranting speech topped two hours and featured Trump attacking everyone from his former attorney general Jeff Sessions to never-Trump Republicans and "people in Congress that hate our country."

According to Toronto Star White House correspondent Daniel Dale, the speech was the longest Trump has made by nearly 40 minutes.

As The Daily Beast's Asawin Suebsaeng noted, people began to leave the lengthy speech early because it was so long — apparently causing Trump to claim that nobody was leaving.

"Attendees behind press area started laughing because they all could see," Suebsaeng tweeted.

Trump just started bragging that nobody had left early during his two hour speech at #CPAC2019 literally as a fairl… https://t.co/iUIvoCPxyP
— Asawin Suebsaeng (@Asawin Suebsaeng) 1551554352.0

"Is he talking just long enough so he can brag that he gave the longest speech in CPAC history?" writer Lynn Comella tweeted.

Check out more responses to the rambling, record-breaking speech below:

Trump's CPAC speech is now over 2hrs. How in the world can anyone tolerate his droning grievance-fest for that lon… https://t.co/nRZ3P4WGPx
— Steve Pearl (@Steve Pearl) 1551554234.0