Jewish cartoonist on Meghan McCain debacle: 'We should be able to voice opinions without show trials' 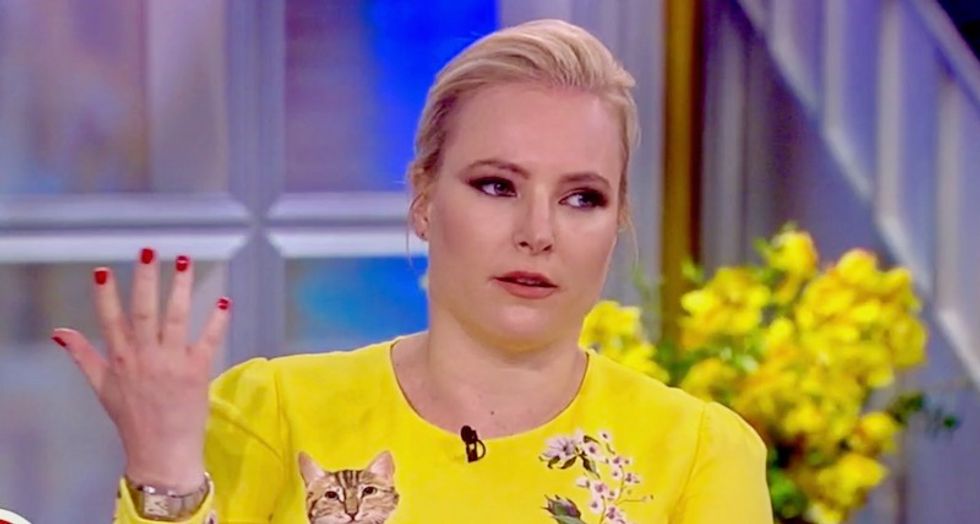 Last week, Meghan McCain broke down in tears on The View over comments by Rep. Ilhan Omar (D-MN) that have been construed as echoing anti-Semitic tropes.

The controversy over Omar prompted President Donald Trump to claim that there's anti-Jewish bias in the Democratic Party -- even though the President himself refused to condemn the Nazis that marched in Charlottesville, North Carolina.

On The View, McCain pointed to her father's relationship with Joe Lieberman and his wife, Hadassa, to explain why she was personally so upset by Omar's comments, despite not being Jewish.

McCain shot back that Valley's art was anti-Semitic, tweeting "This is one of the most anti-semitic things I’ve ever seen. Also, this reveals so much more about you than it does me..."

Twitter was quick to point out that Valley is Jewish -- his father was a prominent New York Rabbi -- and that much of his work, including his book Diaspora Boy,  grapples with the American-Jewish experience. Several commentators pointed out that if Valley's cartoon was one of the most anti-Semitic thing she's ever seen, she hasn't been paying much attention to world events.

"what does anti-Semitic even mean to you? he’s a Jewish cartoonist who has spent his career examining Jewish identity, Zionism & anti-semitism. if this is the most anti-Semitic thing you’ve ever seen, you haven’t spent any time examining those issues yourself," posted Ezra Koenig, lead singer and guitarist of the band Vampire Weekend.

We spoke with Valley about the controversy, and whether it's more stressful to be yelled at by Megan McCain or by Alan Dershowitz (who is also not a big fan of Valley's work) and how to combat anti-Semitism without attacking Jewish artists or vilifying one of the first Muslim women in Congress.

Tana Ganeva: So you're used to getting yelled at by Alan Dershowitz. Megan McCain is kind of next level in terms of her prominence. Compare and contrast!

Tana Ganeva: How can people who are not super immersed in this discussion ethically enter the conversation without saying something thoughtless and stupid, while keeping in mind that anti-Semitism does seem to be on the rise in Europe and the US?

Eli Valley: From Ilhan Omar's perspective or Megan McCain's? I think it's important to try not to either appropriate Jewish culture and try to claim Jewish trauma while smearing a woman of color Muslim Congressperson. And ... from all perspectives, to be sensitive to language which has unfortunately overlapped with some bad shit.

Tana Ganeva: So what could Megan McCain have done better, besides not yelling at you on Twitter?

Eli Valley: Not start crying based on knowing Joseph and Hadassah Lieberman. And not talk about understanding Jewish fear despite not having "blood-related" Jewish ties. The whole blood thing is another layer of disturbance because -- not that it was her intent, but since she's concerned about language -- when you bring blood lineage into the picture, it's the way some pretty nefarious types talk about Jews.

But generally just don't engage in Islamophobic smear campaigns and don't smear people because they criticize America's relationships with Israel. It's pretty basic, you know? We should be able to criticize Israel. We should be able to voice our opinions about our political philosophies and our ideologies without show trials.

Tana Ganeva: Your work has been instrumental in shifting the discussion on Israel-Palestine, centering the idea that Palestinians are people, not merely impediments to Israeli settlements or the coming of Jesus or whatever. Are you hopeful on that front?

Eli Valley: I would push back on the idea -- I don't know that my work has changed the conversation on Palestine itself. But I hope it's helped change the American Jewish conversation in terms of giving a more galvanized voice to the Jewish left. And pushing back at the myth, perpetuated by the Jewish right, that they speak for all Jews and that they embody authentic Jewish life, when they represent only a minority of American Jews.

Tana Ganeva: Are you going to make up with Megan McCain?

Eli Valley: Honestly I don't really think I'm on her radar. When I say that I'll go on The View, it's a joke, because it's out of the realm of reality.

Tana Ganeva: What can everyone learn from this?

Eli Valley: Just the basics. Not to appropriate other people's tradition and trauma and not to engage in smear campaigns against people because they have different opinions on Israel/Palestine.