John Oliver: You can tell Jared Kushner is an idiot just by looking at him 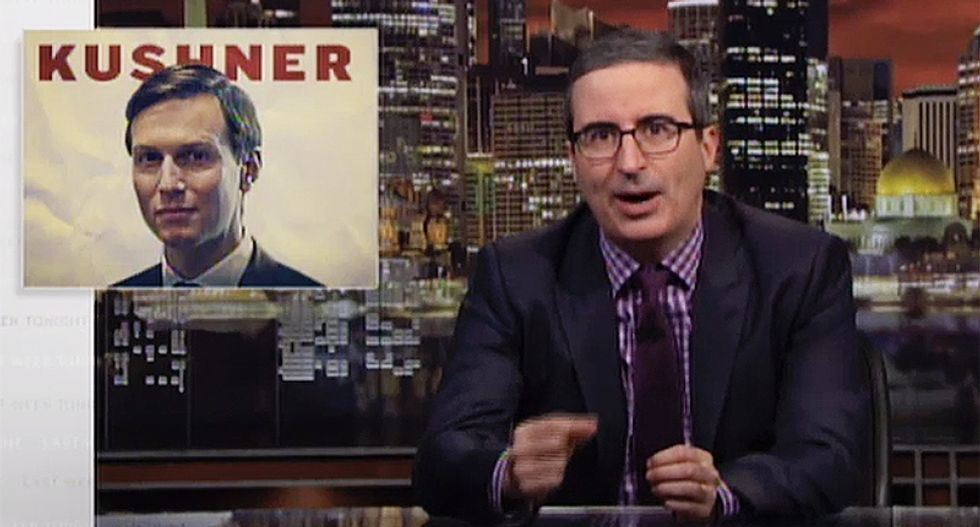 In his recap of the week, HBO host John Oliver couldn't help but notice that Jared Kushner is far too attractive to be managing the docket of issues he's been assigned.

When looking at photos of past negotiators of Middle East peace, they look like they've been filled with stress and aged prematurely. Kushner looks "radiant," according to Oliver. Kushner is far too rested to be smart enough to handle the issues he's supposed to be solving.

"Jared is exactly where you'd expect a boy his age to be," Oliver said. "Trying to broker a peace deal in one of the most intractable conflicts in geopolitical history. Jared has been promising a Middle East peace deal and recently announced he'd unveil it after the Israeli elections, which, as far as promises go, isn't one."

Kushner's news was stepped on by the report that his clearance was ordered by his father-in-law because intelligence agencies said he was too susceptible to blackmail and manipulation from foreign powers. Oliver noted that reports revealed that former chief of staff John Kelly and ex-White House counsel Don McGahn wrote memos of concern about the president's demand.

"Honestly, the only surprising thing there is the claim that Kelly and McGahn bothered to write memos raising concerns," Oliver said. "What's Trump supposed to do with a memo raising concerns? Read it? A memo? With what? His eyes? For what possible reason? So he can know stuff? To what end? So he can do stuff? Why? So he can get more memos about the stuff he's doing? Nice try, memos!"

The report by the Washington Post revealed that officials from China, Mexico, Israel, and the UAE saw Kushner as exploitable and hoped to manipulate him. That directly harms national security, Oliver cautioned, but not before making fun of him a little more.

"Manipulate him? This guy?" Oliver said. "He'd sniff that out in a heartbeat. Unless of course, someone got his nose!"

Oliver then made the hand gesture often done by adults to babies claiming to steal their nose. Oliver then blackmailed Jared that he wouldn't give his nose back without classified state secrets about the United States.

But it was Kushner's complexion that had Oliver up in arms. The host argued that the top aide to President Donald Trump looks far too rested.

"This is a guy who is not just brokering peace in the Middle East, he's tackling the opioid crisis, and national infrastructure as the head of the office of innovation, while constantly traveling half-way around the world, and doing it all while navigating the psycho-sexual Stalingrad that is marriage to Donald Trump's daughter. Where are the bags under his eyes?! How is his skin so smooth!? It is deeply worrisome how unworried he looks! The only way you maintain that glow with that to-do list is by not really understanding anything on it."

Oliver went on to scroll through photos of Kushner, claiming that he has "rested resting face." He then compared Kushner's photo to previous leaders who tried to broker peace deals and how incredibly old and wrinkled they appear. Kushner should be far more worried about the issues he's facing, but to be fair, he only recently got his top-secret security clearance.

In a move that environmental groups celebrated as a "historic victory" following years of campaigning to remove Roundup and similar weedkillers from store shelves, Bayer on Thursday announced that it will halt the sale of glyphosate-based herbicides to consumers in the U.S. lawn and garden market by 2023.

"Bayer's decision to end U.S. residential sale[s] of Roundup is a historic victory for public health and the environment," Andrew Kimbrell, executive director of the Center for Food Safety (CFS), said in a statement.

Bade was just doing her job, but she drew a ton of fire. Her "analysis" was precisely the kind that drives everyone crazy—everyone, that is, who is not a total nihilist about the power and promise of American politics. Among the many replies to Bade's tweet, my favorite came from writer and media maven Parker Molloy. "Oh, come on. I know that it's your job to treat politics like sports, but just … for once, can you not? I honestly wouldn't be able to sleep at night if this was what I was putting out into the world."

US gymnastics superstar Simone Biles said she was still struggling with the "twisties", the mental block that has sidelined her in Tokyo, as her Olympic campaign looked in increasing doubt on Friday.

Biles posted video on Instagram of her landing on her back in training, on cushioned pads, and wrote that she was having problems "literally on every event, which sucks".