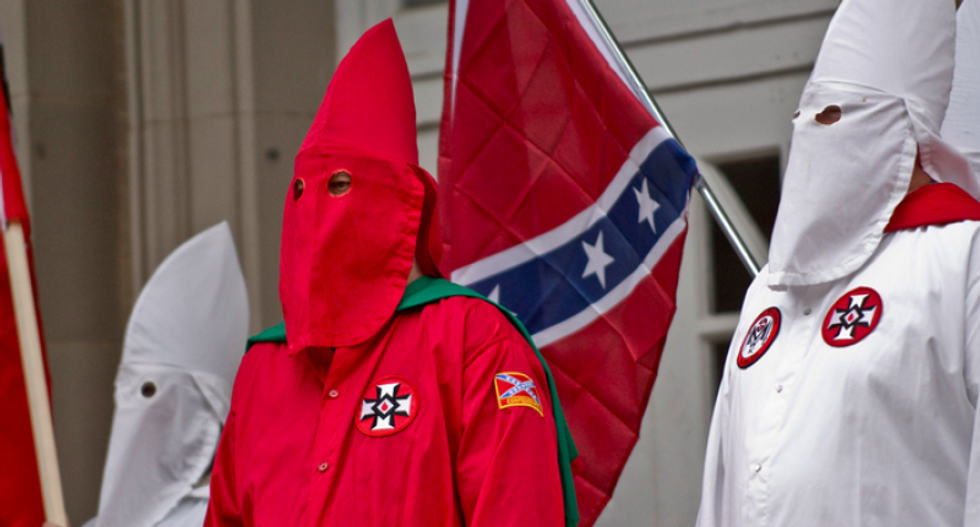 It sometimes seems that the Ku Klux Klan (KKK) is never far from the spotlight. This is odd, since its actual numbers are officially in sharp decline according to the Southern Poverty Law Center (SPLC) – one of the most effective, respected and thoroughly informed of anti-Klan groups.

The SPLC’s spring 2019 report, The Year in Hate and Violence

argues that in the US, “White Supremacy flourishes amid fears of immigration and [the] nation’s shifting demographics”. Yet it offers one glimmer of hope, in the rapidly falling membership of the nation’s various KKK groupings.

The report, headlined “Rage Against Change”, states that the number of Klan groups has dropped significantly since 2016, when there were 130. There are now 51. The SPLC concludes: “It may be that the KKK, having somehow endured since 1866, is finally on its last legs.”

It goes on to claim that this decline is because “the KKK has not been able to appeal to younger racists, with its antiquated traditions [and] odd dress … Younger extremists prefer Fred Perry polo shirts and khakis to Klan robes”.

However, as an observer of the Klan, I would argue that it is those very traditions, those icons, which make the order hit the headlines so often. The Klan hood is still one of the most widely recognisable symbols of hate. Yes, it is old fashioned, and certainly, it is impractical. But surely that’s the point.

That curious – absurd – pointed shape, with the sinister eye holes, immediately conjures up visions of lynchings, the fire-bombing of African-American churches and other acts of terrorism. It is a far more recognisable symbol than other logos used by the alt-right and other white supremacists, with the obvious exception of the swastika.

And in spite of the Klans’ declining numbers, it remains a powerful symbol. A quick trawl through some recent news stories seems to bear this out.

In fact, the symbolism of the Klan is currently so powerful that it is difficult to think of a situation where using its instantly recognisable iconography would not bring near universal condemnation. The Governor of Virginia, Ralph Northam, discovered this recently when pictures emerged of the 1984 yearbook for the Eastern Virginia Medical School which he attended. One photo, on a page headed by his name, showed a figure in full Klan costume standing next to another in “blackface”. Northam, a Democrat, issued an apology, although later denied that he had been in the image. Still, he faced calls for his resignation.

It is obvious that the Klan’s symbols and its very name remain shorthand for white supremacy, bigotry and hate. This became apparent to the British actress, Joanna Lumley, who made an extremely ill-advised – and not very funny – joke at the 2019 British Academy of Film and Television Arts (BAFTA) Awards. She quipped that she was surprised by the success of Spike Lee’s film BlacKkKlansman at the “Klan film festival”.

Within minutes of her remark, the postings on social media almost unanimously condemned the 72-year-old actress and her script writers for insensitivity.

Given this general toxicity, linking an opponent with the Klan is also an effective political tool, as no doubt Ralph Northam’s enemies realised. A strand of the opposition to Donald Trump has drawn on this tactic, with a recent example coming from the Venezuelan President Nicolas Maduro.

Yet there are those who actually relish the notoriety of being associated with the KKK – or at least they seem to. In February, Goodloe Sutton, the editor of a newspaper in Linden, Alabama, wrote: “It is time for the Ku Klux Klan to night ride again”.

He appeared to see the Klan as the only body able to make sure that taxes did not continue to rise in Alabama. Despite the outrage, Sutton stood by his demands and when asked about the Klans’ violent past simply replied: “A violent organisation? Well, they didn’t kill but a few people.”

Sutton was soon removed from the Hall of Fame of the University of Southern Mississippi and condemned by the police. He has since been replaced as editor by a black woman.

Yet the predominantly black population of Linden seemed more or less resigned to the ongoing racism. One local businessman sadly admitted that the community was “numb”. He said that citizens seemed to have adopted the attitude that “if you’re black and live here, people think you don’t have a problem with racism. Otherwise, they say you should just move”.

But however disturbing Sutton’s plea may appear, it also serves to show how impotent today’s Klan members actually are. When asked about the Klan in Linden, the 79-year-old editor admitted it had died out in the 1960s. His article was pleading for it to be re-formed, which thankfully, as the declining numbers in the SPLC’s report show, is very unlikely.

Perhaps that is not the point, though. Perhaps it is the symbolism of the Klans and its very name which is the real threat, offering, as it does, a recognisable point of unanimity for the racist extremists of America.

By Kristofer Allerfeldt, Senior Lecturer in History, University of Exeter