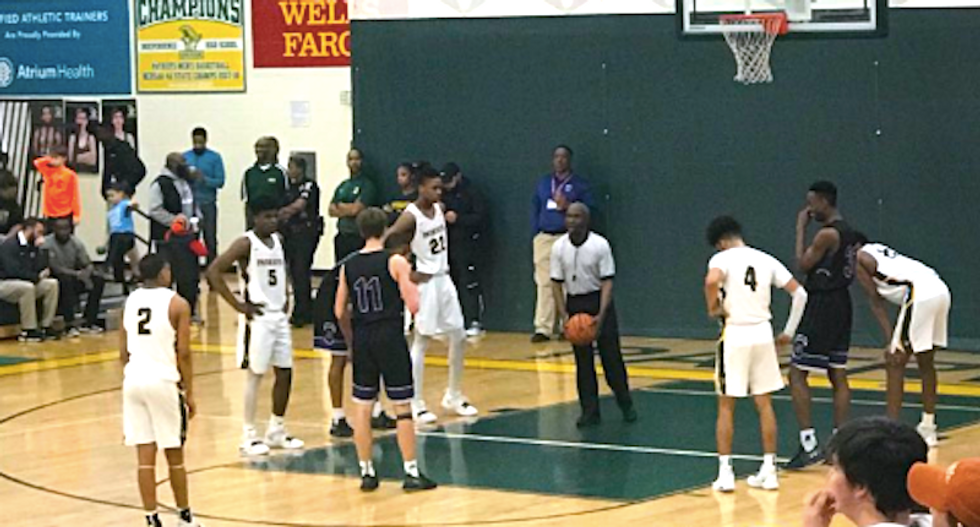 A North Carolina high school suspended a star basketball player for making racist comments on social media, after getting an upcoming playoff game moved away from a mostly black opponent's gym.

Ardrey Kell High School suspended the player, who is white, after seeing a screenshot of the player's Snapchat post using racial slurs in reference to West Charlotte High School, reported the Charlotte Observer.

“A very swift and appropriate decision was reached to immediately suspend the player indefinitely,” said Ardrey Kell coach Mike Craft. “The player will not be with the team or at the game. The individual comments that were made are not representative of the values of our program, the AK school community, or the expectations we have of our student-athletes.”

Craft said the school learned of the Snapchat post, which was automatically deleted shortly after it was created, Monday night after seeing screenshots of the remarks shared on social media.

The game had been scheduled to be played at West Charlotte, but the school's athletics director said the North Carolina High School Athletic Association informed administrators their gym was too small to host the game, which was moved to nearby Vance High School.

The player's family issued a statement saying they and the teenager were "devastated" by his racist remarks.

"While we stand by our son, and love him deeply, we do recognize the wrong and hurt caused by careless words," the family said. "We do not believe his words represent who he is as a person, his overall character and his heart towards others. Being part of a diverse community is significant to our values as a family, but it is clear from today, that there are more conversations to be had as today’s words don’t reflect the tone of our home nor (the) true heart of our son."

“(The player) is ashamed and deeply sorrowful for his word choice," they added. "He has met with his teammates, coaches, and principal and personally apologized. And for the many who (he) will never get to speak to regarding today, he is sorry."

The family said there was no excuse for the teen's behavior, and they stand behind the school's decision to suspend him from the team indefinitely.

The 6 foot 1 junior guard is considered one of team's best players.