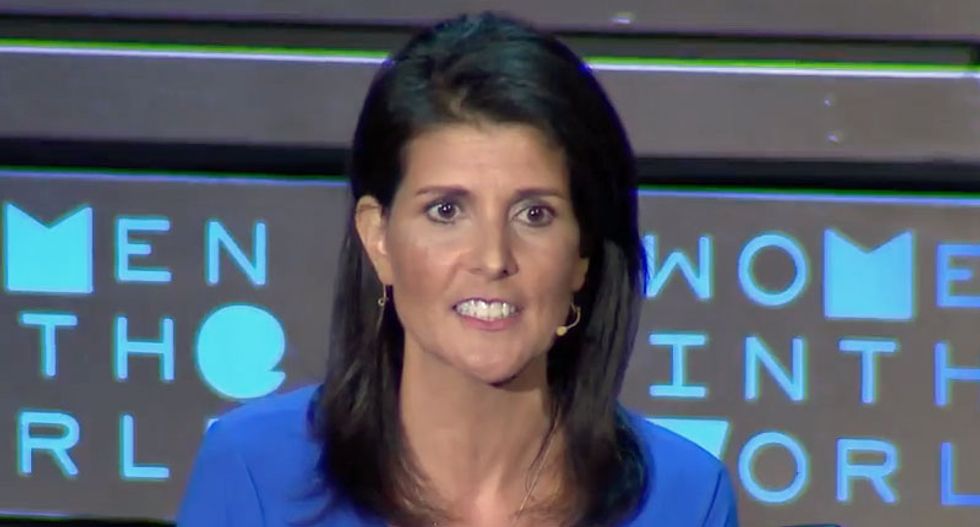 Donald Trump's former ambassador to the United Nations was brutally mocked on Wednesday for failing to understand health care policy.

"In the United States it costs, on average, $12,000 to have a baby. In Finland it costs $60," Sanders posted. "We've got to end the disgrace of our profit-driven health care system and pass Medicare for All."

Haley suggested that was from Finland "skimping" on health care.

"Alright Bernie Sanders, you’re not the woman having the baby so I wouldn’t be out there talking about skimping on a woman when it comes to childbirth. Trust me!" Haley wrote. "Nice try though."

"Health care costs are too high that is true but comparing us to Finland is ridiculous. Ask them how their health care is. You won’t like their answer," Haley suggested.

@Vinncent @NikkiHaley They’re mostly asleep right now but they’re gonna have a good laugh in the morning
— Run the Joules (@Run the Joules) 1553127633.0

@NikkiHaley Why not just tweet "I am uninformed and dangerous, but I speak to millions, so take seriously what I say"?
— Evan Handler (@Evan Handler) 1553129946.0

@NikkiHaley Hey, I am not Finnish but I have lived in Finland for around 5 years. The healthcare system here is fuc… https://t.co/pfHqHkgp0z
— Lord Lambert (@Lord Lambert) 1553128099.0

@NikkiHaley @SenSanders I’d assume that as a former UN Ambassador, you’d be aware of how the US healthcare system r… https://t.co/WMD3T5QhiJ
— Jason Bumiller (@Jason Bumiller) 1553121479.0