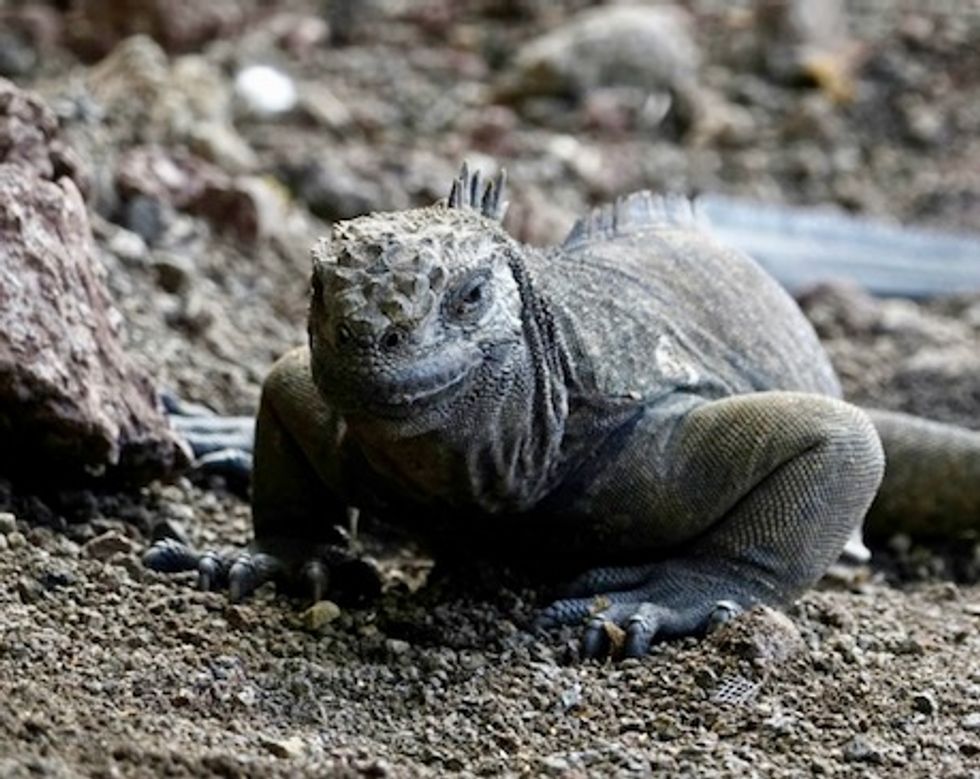 Armed only with gloves and large sacks, park rangers and volunteers are battling the scourge of plastic waste blighting the idyllic Galapagos Islands and their unique creatures.

Tons of plastic waste wash up on the shores of the Galapagos islands where microparticles end up in the stomachs of species found only in the Pacific archipelago 1,000 kilometers (600 miles) west of mainland Ecuador.

Those microparticles, often from waste discarded in big cities from other countries and even continents, are perhaps one of the greatest threats to the iguanas, tortoises, birds and fish of the Galapagos.

The tiny plastic pieces become part of the food chain "that we may later feed on," biologist Jennifer Suarez, a marine ecosystems expert with the Galapagos National Parks (PNG), told AFP.

Yet while those objects may appear solid to the naked eye, when battered against rocks or by the force of waves, microparticles splinter off, which are subsequently ingested by animals.

Every year, and despite the punishing heat and sun, expeditionary groups arrive at Galapagos beaches to survey the damage caused by man.

Sex toys, shoes, lighters, pens and tin cans are amongst the waste found in areas used by animals, including some in danger of extinction.

In uninhabited zones such as Punta Albemarle, in the far north of Isabela Island, where AFP joined a team of cleaners, waste from far and wide was discovered.

"More than 90 percent of the waste gathered doesn't come from Galapagos activities, but rather from South America, Central America and even a great deal of waste with Asian branding," said PNG director Jorge Carrion.

With a population of around 25,000, the archipelago, a UNESCO World Heritage site, has tightened its rules regarding plastics use in recent years.

Most of the plastic waste washing up on the Galapagos shores are bottles of Peruvian, Colombian or Panamanian products, and containers with Chinese branding.

That waste "probably comes from the fishing fleets from Asia just outside the Galapagos' exclusive economic area," said Carrion, speaking from the PNG dock in Puerto Ayora, the capital of Santa Cruz Island.

Since 1996, local fishermen have been cleaning the remotest islands and for the last three years, they've been keeping a register.

"This lets us identify the origin of waste on unpopulated coasts," said Suarez.

"Over the last two years of monitoring, we've noticed that the largest number of brands are Peruvian and Chinese."

While currently there is no such legislation, the hope is that this register can be used in the future to make compensation claims against those responsible for environmental harm.

Park rangers also keep a register, but theirs is of the animals affected by the waste, such as the cormorant that builds its nests using used diapers and plastic bags, or the body of a booby found buried in a pile of rubbish.

Another shocking discovery is plastic bags that have been bitten by sea turtles that mistake them for jellyfish, an important part of their diet.

"We have indiscriminately thrown so much waste into the sea that it has turned up at coasts where there are no people, but already there is garbage," Sharlyn Zuniga told AFP.

The 24-year-old clean-up volunteer said she came across pristine beaches with fine white sand, but spoilt by rubbish.

"What I saw was very hard (to take). We're used to seeing the best part of the Galapagos in pictures and postcards," she said.

AFP / Rodrigo BUENDIA Since the start of the year, eight tons of garbage has been collected by volunteers on the Galapagos Islands

Large bags of plastic waste collected on the archipelago are sent to mainland Ecuador to be incinerated.

"We're getting rid of the waste that accumulates in these places, to avoid it breaking down and turning into microparticles," said Suarez.

Over time Carrion hopes less and less waste will be collected but 2019 is expected to turn up as much as 2018.

"We need to go beyond just collecting waste. We need to appeal to consciences on a global level, so people stop throwing waste into the sea," said Carrion.