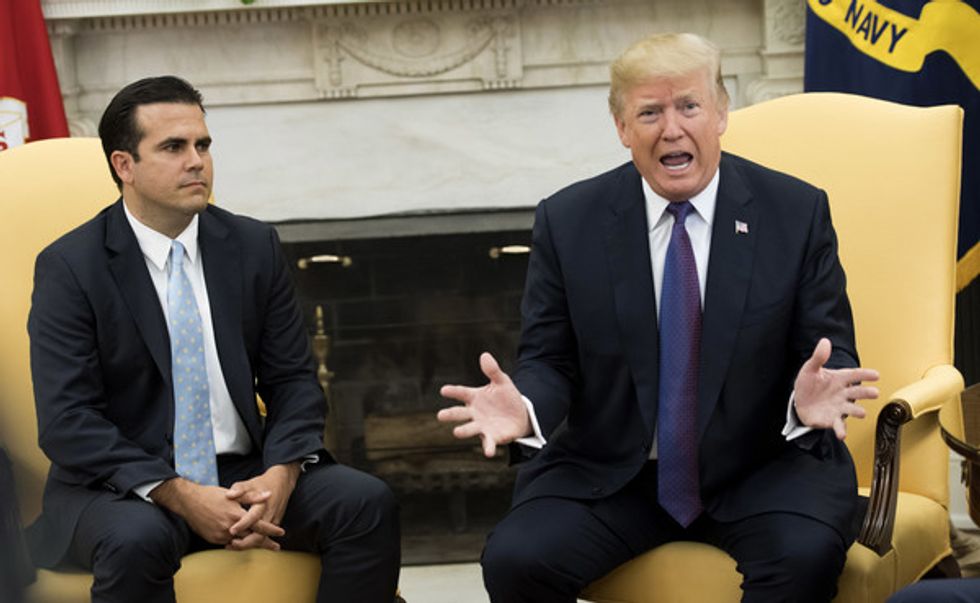 In an interview with CNN's Jim Acosta, Puerto Rico Gov. Ricardo Rosselló hit back against criticisms from President Donald Trump about disaster funds for 2017's Hurricane Maria, which nearly decimated the island's infrastructure.

"If the bully gets close," Rosselló said, "I'll punch the bully in the mouth."

"It would be a mistake to confuse courtesy with courage," the governor added.

Aides to Roselló told CNN that "during a tense encounter at the White House on Wednesday they were warned by senior White House officials that representatives for the US territory were pushing too hard to arrange a meeting aimed at discussing the island's dire situation with the President."

This came after Trump denied a request to meet with the Puerto Rican governor.

"You guys have to f***ing stop with the meeting request," a White House official reportedly told the governor's aides.

Navarro, CNN's sources said, also told them that their "governor is f***ing things up."

Earlier in the week, Rosselló released a statement condemning the president's reported desire to withdraw funding from the US territory because of claims that it's been used for non-disaster relief efforts, such as the repayment of debts.

"The comments attributed to Donald Trump today by senators from his own party are below the dignity of a sitting President of the United States," the PR governor said. "They continue to lack empathy, are irresponsible, regrettable and, above all, unjustified."

“I want to be very clear: Not a single federal dollar has been used to make debt payments," Rosselló added. "This has been the most transparent recovery in the history of the United States, providing unprecedented access and collaboration with federal agencies. In fact, just yesterday we reached an agreement with FEMA on the transition of responsibilities for the reimbursement of recovery funds. An agreement predicated on the acknowledgment by the federal government that appropriate fiscal controls are in fact established."

You can watch CNN's report and parts of the Rosselló interview below:

In an exclusive interview with CNN’s Jim @Acosta, Puerto Rico Gov. Ricardo Rosselló said he would not sit back and… https://t.co/JAR8GwIUTM
— CNN Newsroom (@CNN Newsroom)1553786471.0