'Show us your bone spurs!': Ex-Nebraska Senator demands Trump's x-rays -- 'you don't grow out of them' 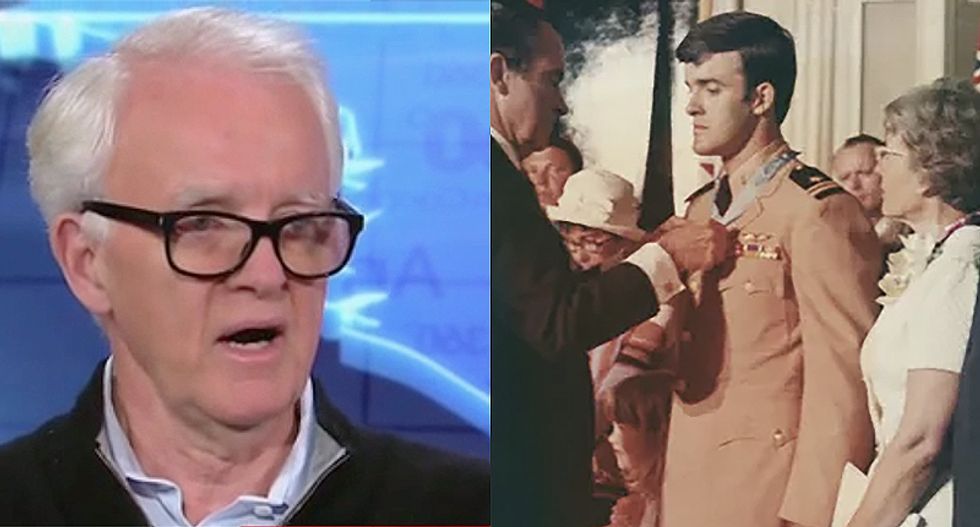 In an indignant rant, former Sen. Bob Kerrey (D-NE) railed against President Donald Trump for calling soldiers "suckers" for going to Vietnam when Trump managed to avoid it.

Kerrey was a SEAL officer in the U.S. Navy during Vietnam and was ultimately put on SEAL Team One. While in combat, Kerrey was seriously injured and lost the lower part of his right leg, for which he was awarded the Medal of Honor. His comments came after Trump railed against late Sen. John McCain (R-AZ) on Twitter and during an Ohio rally.

"This is the guy that showed up and said, 'I don't want to go to Vietnam, like [McCain] did,'" Kerrey explained. "He said, 'I wasn't eligible to go to Vietnam because I had bone spurs.' You don't grow out of bone spurs. I call on the president, get your feet x-rayed. Let's see those x-rays. I want to see. While John McCain was flying combat operations in Vietnam, you were, I think, falsifying that you had bone spurs in order not to go to Vietnam. Now, I know lots of people who avoided the draft, but this isn't what he's saying. He said I physically couldn't go. Well, Mr. President, get your feet x-rayed and let's see those bone spurs. I don't think he has them."

Kerrey noted that Trump would still have them today if he truly had bone spurs.

"Everything he's saying is bad enough, but when he says, 'He's not my kind of guy because he went to Vietnam, because he was flying combat missions and got shot down, was held as a prisoner.' That's not your kind of guy?" Kerrey went on. "Who is your kind of guy? Your friends who falsified their records so they didn't have to go? I think that's the answer. I mean, I think he sees all of us who went to Vietnam as fools. We were the suckers. We were the stupid ones. We were the ones that didn't have the resources to be able to get out of the draft."

The former senator noted that Trump was a privileged rich kid who was able to buy his way out of the draft.

"So, show us your bone spurs," Kerrey continued. "Let's see those x-rays. Because I think the x-rays will show that he doesn't have bone spurs and then he'd have to say, 'OK, I didn't want to go to Vietnam. I got out of the war. While John McCain was flying combat missions, I made every single effort I could to avoid the draft.'"

He blasted Trump, as someone who portrays himself as "incredibly smart" and "this tough guy," but when it came time to suit up, he went to a military school instead, "where they marched around and dressed up as soldiers.

"I always find that the people who are actually the toughest people, who've actually risked their lives, sacrificed limbs, done incredible things, they're not the ones saying how tough they are," he said.