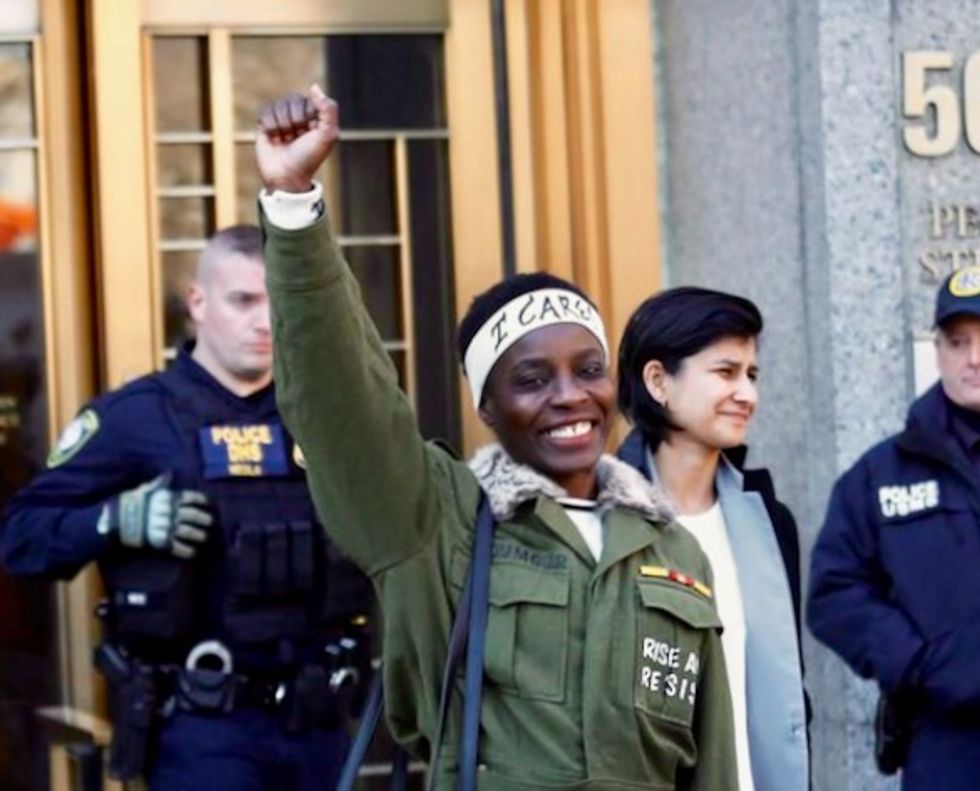 Therese Patricia Okoumou raises her fist after her sentencing for conviction on attempted scaling of the Statue of Liberty to protest the U.S. immigration policy, outside a federal court in New York, U.S., March 19, 2019. REUTERS/Shannon Stapleton

A woman convicted of trespassing and disorderly conduct after she climbed the Statue of Liberty’s stone pedestal on July 4 last year to protest U.S. immigration policy was sentenced to 200 hours of community service and five years’ probation on Tuesday.

Therese Patricia Okoumou arrived at her sentencing hearing before U.S. Magistrate Judge Gabriel Gorenstein in Manhattan with her whole face in clear tape, wearing a headband that said “I CARE”. She removed the tape after Gorenstein said he would not proceed otherwise.

Okoumou was arrested after she scaled the base of the statue and began a three-hour standoff with police that led to the evacuation of Liberty Island on one of the landmark’s busiest days of the year.

She and her lawyer, Ron Kuby, later said her act of civil disobedience was primarily to demonstrate against the Trump administration’s policy of separating migrant children from parents caught crossing the U.S. border illegally.

Administration officials said the policy was needed to secure the border, but it was ended in June after images of separated youngsters held in cage-like detention facilities sparked a furor both at home and abroad.

“This case is a fight against injustice,” Okoumou, a U.S. citizen born in the Democratic Republic of Congo, said before she was sentenced in a courtroom packed with her supporters. “Well into the 21st century, some are justifying the caging of migrant children.”

Prosecutors had asked that Okoumou spend at least a month in prison. Gorenstein said that was unnecessary to deter her from committing crimes, but he rebuked her for putting the lives of her rescuers in danger.

“A person with some empathy might have said today, ‘I’m sorry that I risked the lives of others,’” the judge said.

Gorenstein said he would consider a motion to end the probation early if Okoumou adhered to its terms.

Kuby said at the hearing that Okoumou had recently been offered a job at the nonprofit Salvage Art Institute.