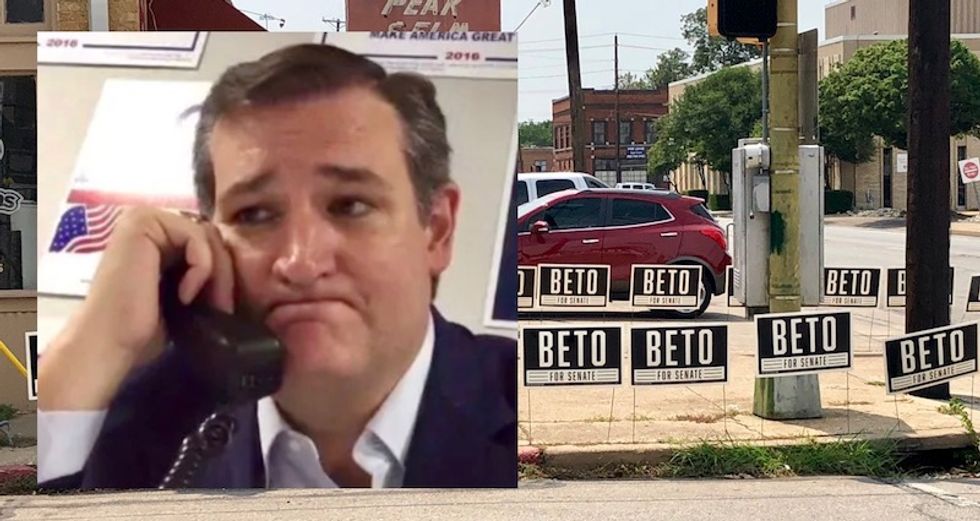 Alarmed by the 2018 midterms that saw the Republican Party lose a record number of seats in the House and incumbent Sen. Ted Cruz (R) barely cling to his seat after a challenge from rising star Beto O'Rourke (D), the Texas GOP is gearing up for a battle in 2020.

According to a report at Politico, the Texas state Republican Party has massively increased fundraising goals in an attempt to hang on to seats in a state that is seeing large demographic changes which threaten the GOP's stranglehold.

"Facing a rapidly changing voter base, anti-Trump fervor and a more motivated Democratic Party, the state GOP is moving earlier than ever to prepare after watching two House members lose in 2018 and another half-dozen win by fewer than 5 points," Politico reported.

The report states that the party has deployed staffers to battleground communities months earlier than usual -- particularly in the suburbs.

"We are taking seriously our need to earn every vote in Texas," explained Texas Republican Party Chairman James Dickey, adding that donors "are also taking it much more seriously when I tell them how desperately I need them to participate or become a supporter of the party."

Of particular concern are districts where GOP officeholders barely won in 2018.

"The state GOP will be adding organizers in Houston, San Antonio, Dallas and even traditionally Democratic El Paso to its early hires," Politico reported. "Those metro areas overlap with the districts of the six House Republicans who won narrowly in 2018: Reps. Michael McCaul, Chip Roy, Pete Olson, Will Hurd, Kenny Marchant, and John Carter."

Additionally, the state GOP is seeking a huge increase in donations for a planned television blitz, hoping to raise $5 million, doubling what they took in in 2018.

"Texas Republicans acknowledge that they have to win over voters like women, minorities and others that President Donald Trump has alienated and who are moving to Texas towns," the report continues.

Democrats have other plans, including dragging an increasingly unpopular Donald Trump into the mix.

"Now as we look toward 2020, the DCCC (Democratic Congressional Campaign Committee) is taking the lessons we learned and expanding the battlefield further into parts of Texas that are ready to reject the kind of reckless Washington politics that Congressmen McCaul, Roy, Olson, Hurd, Marchant and Carter have rubberstamped," explained DCCC spokesperson Cole Leiter.